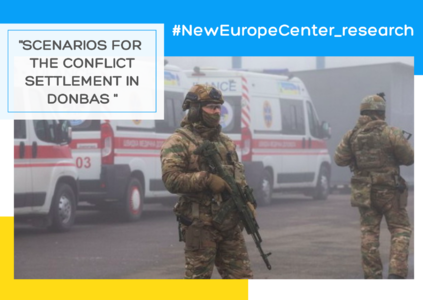 Scenarios for the Conflict Settlement in Donbas

Volodymyr Zelensky’s coming to power has raised expectations regarding the settlement of the conflict over Donbas among many Ukrainians, as well as foreign observers. A poll conducted by the Rating Sociological Group showed that 24% of Ukrainians believe that it would take less than one year to establish peace in Donbas, and almost 20% expect it within the next one or two years.(1) The objective of this study was to analyze the scenarios of the development of the situation around Donbas in the coming year. This period of time was also chosen given that the Ukrainian authorities had set such a deadline before themselves and Russia to resolve the conflict.

Overall, analysts at the New Europe Center have analyzed six scenarios and two sub-scenarios (variants of Ukraine’s decisions that may occur under certain scenarios or lead to a certain scenario) regarding the settlement of the conflict in the East of Ukraine, inspired and supported by Russia: the status quo; freezing of the conflict; reintegration of Donbas on the basis of decentralization; autonomy / special status for Donbas (federalization); Ukraine’s military operation to return the occupied territories; Russia’s offensive (full-scale invasion in Ukraine); Ukraine’s withdrawal from the Minsk negotiations; the introduction of a peacekeeping mission in Donbas.

To learn more about the methodology and the analysis of each scenario, see the New Europe Center’s website in Ukrainian. We present in English the main observations and recommendations based on the analyzed scenarios. We also bring to your attention the rating of probability and desirability of scenarios based on 65 estimates provided by Ukrainian and foreign experts.