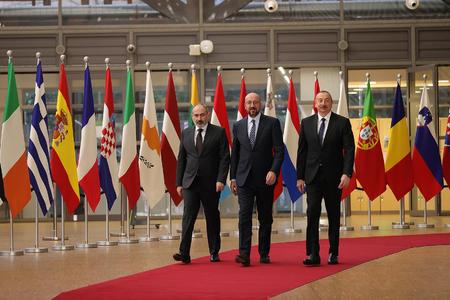 The April 6 meeting of Pashinyan and Aliyev in Brussels: What next

On April 6, 2022, Armenian Prime Minister Nikol Pashinyan and Azerbaijani President Ilham Aliyev held a meeting in Brussels mediated by the President of the European Council, Charles Michel. It was the second meeting in Brussels mediated by the European Union. The first took place in December 2021; on February 4, 2022, Armenian and Azerbaijan leaders held an online meeting with the participation of Michel and French President Emmanuel Macron. A week before the April 6 meeting, the EU hosted a meeting of high-level officials from Armenia and Azerbaijan in Brussels to advance joint efforts to find solutions to issues between both countries. The meeting between Secretary of the Security Council of Armenia Armen Grigoryan and assistant to the President of Azerbaijan Hikmet Hajiyev was facilitated by the EU Special Representative for the South Caucasus Toivo Klaar. As a result of the April 6 meeting, Pashinyan and Aliyev agreed to instruct their Ministers of Foreign Affairs to work on the preparation of a future peace treaty, which would address all necessary issues.

Meanwhile, in line with the Sochi statement of November 26, 2021, it was also agreed to convene a Joint Border Commission by the end of April. The mandate of the Joint Border Commission will be to delimit the bilateral border between Armenia and Azerbaijan and ensure a stable security situation along, and in the vicinity of, the borderline.

The meeting in Brussels was another step to establish a separate track of Armenia–Azerbaijan negotiations through EU mediation along with the Russia–Armenia–Azerbaijan trilateral format. However, both formats have the same goal: to stabilize the situation in the region after the 2020 Karabakh war. The West was not happy to be entirely sidelined during the signature of the November 10, 2020 statement and looked for ways to re-establish itself in the Nagorno Karabakh conflict settlement. The war in Ukraine and the complete rupture of Russia–West relations made any joint actions by Russia and the West extremely unlikely on any issues, including Nagorno Karabakh. However, as both sides seek the stabilization of the situation, we may assume that these separate tracks will reinforce each other rather than create obstacles. It should be noted that before the April 6 meeting, the Russian President held phone talks with Armenian and Azerbaijani leaders. Pashinyan and Aliyev provided details of the meeting to President Putin during phone talks after April 6. Russian Foreign Minister Sergey Lavrov fully endorsed the delimitation and demarcation of the Armenia–Azerbaijan border and the signature of a peace treaty between the two countries during an April 8 meeting with his Armenian counterpart in Moscow.

Meanwhile, the April 6 meeting was not the only important news on the Nagorno Karabakh settlement process in the previous week. During the joint press conference with his Armenian counterpart, Lavrov stated that the US and France were unwilling to work with Russia within the OSCE Minsk Group co-chairmanship format. Of course, the Minsk Group comprises 11 states, and the de facto dissolution of co-chairmanship does not legally mean the dissolution of the group itself. However, given the fact that since 1997, co-chairs have been at the center stage of the negotiation process, facilitating meetings and providing different ideas on the settlement of the conflict, it is challenging to perceive any meaningful activities of the Minsk Group without co-chairs.

What may these events mean for the future of Nagorno Karabakh? The April 6 statement has no word about Nagorno Karabakh while emphasizing the necessity to normalize Armenia–Azerbaijan relations. In early March 2022, Azerbaijan provided Armenia with five principles of the future peace treaty, emphasizing mutual recognition of territorial integrity and no mention of the future of Karabakh. Armenia accepted those principles but stated that the rights and security of Armenians living in Karabakh and the status of Karabakh should be discussed. However, the Armenian government stopped saying that it would not accept any status for Nagorno Karabakh within Azerbaijan, which Azerbaijani experts explain as Armenia’s readiness to accept autonomy for Karabakh within Azerbaijan. Meanwhile, Azerbaijan continues its policy of putting economic, military and psychological pressure on Nagorno Karabakh Armenians, seeking to force them out.

Armenia and Azerbaijan are close to starting peace negotiations and launching the bilateral delimitation/demarcation commission. As the OSCE Minsk Group de facto has stopped its activities, the Armenian government needs to send clear signals to Nagorno Karabakh Armenians that during the upcoming negotiations, it will not accept any idea of even the highest-level autonomy of Karabakh within Azerbaijan as a compromise solution. Meanwhile, discussions should be continued with France and the US, asking them to send a message to Azerbaijan that those countries will not tolerate Azerbaijan’s policy of forcing Armenians out of Nagorno Karabakh and that it will be costly for Azerbaijan if it continues to pursue that. Simultaneously, close coordination is needed with Russia to secure Armenian population security in Nagorno Karabakh, given the deployment of Russian peacekeepers there. In this context, the accusations against peacekeepers and calls to launch investigations against their actions/inactions will not contribute to that process.