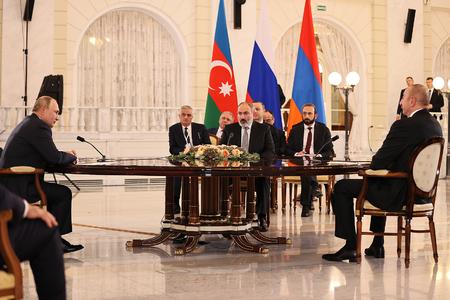 On October 31, 2022, Armenian, Azerbaijani and Russian leaders met in Sochi. The last time Pashinyan, Aliyev and Putin met was on November 26, 2021 to discuss the realization of the November 10, 2020, and January 11, 2021, trilateral statements. At that time, Russia was firmly holding a tight grip over the Armenia–Azerbaijan negotiation process, and it seemed that no one could challenge Russian positions. However, since then, the European Union, and recently the US, have started their active involvement in the Armenia–Azerbaijan negotiations. European Council president Charles Michel organized four Armenia–Azerbaijan summits in Brussels (December 2021, April, May and August 2022). The US entered the process in mid-September 2022, bringing Armenian and Azerbaijani foreign ministers to New York and the Secretary of the Armenian security council and top foreign policy aide to President Aliyev to the White House in late September 2022. As a result of the EU and the US mediation efforts, the sides approved the Prague statement on October 6, 2022, recognizing mutual territorial integrity along with the Alma-Ata declaration of 1991 and agreeing on the deployment of the EU civilian observer mission to Armenia.

Simultaneously, the US proposed signing an Armenia-Azerbaijan peace treaty by the end of 2022. According to the secretary of the Armenian Security Council, Armenia and Azerbaijan agreed to sign a peace agreement and finish the border delimitation process by the end of the year during the September 27, 2022, meeting in the White House. The task to sign a peace agreement within 90 days seemed quite ambitious, given the 34-year history of the Armenia–Azerbaijan conflict. Interestingly, the EU has never put forward any deadlines for Armenia and Azerbaijan, seeking to move forward very cautiously. The active involvement of the US in Armenia–Azerbaijan negotiations indirectly brought the process into the framework of the US–Russia confrontation.

As Americans sought to take the lead, Russia was concerned that the primary goal of the US was to use the Armenia–Azerbaijan peace agreement to push Russian peacekeepers out of Nagorno Karabakh as a part of the US global strategy of Russia’s deterrence and containment. According to Russian logic, if Armenia and Azerbaijan sign a peace treaty, Azerbaijan may not extend the mandate of the Russian peacekeepers beyond the initial five-year term, which ends in November 2025. Russia has concerns that the Armenia–Azerbaijan peace treaty and subsequent withdrawal of the Russian peacekeepers from Nagorno Karabakh may be the first step to push Russia out of the region. The next step could be the demand to withdraw the Russian military base and border troops from Armenia itself, especially after the potential normalization of relations between Armenia and Turkey. Turkish President Erdogan often reiterated that Turkey would normalize its relations with Armenia immediately after the signature of the Armenia–Azerbaijan peace treaty. Even now, some political forces and expert circles in Armenia demand the withdrawal of the Russian military base from Armenia and argue that Armenia should leave the Collective Security Treaty Organization. The normalization of Armenia–Azerbaijan and Armenia–Turkey relations will strengthen these voices.

Thus, objectively, the US approach aimed at the quick signature of the peace treaty between Armenia and Azerbaijan and recognition of Nagorno Karabakh as part of Azerbaijan may significantly decrease Russian military presence in the South Caucasus, but also will result in disaster for Nagorno Karabakh. Russia will not simply follow the US’ efforts to push it out of the region. In this context, the primary goal of the trilateral Sochi summit of October 31 was not to achieve a breakthrough in Armenia–Azerbaijan negotiations but to prevent the signature of the US-mediated peace agreement.

Russia is satisfied with the current volatile status quo when Nagorno Karabakh is de jure part of Azerbaijan but de facto is controlled by Russia, and Baku has no influence and leverage. The best case scenario for Russia is to extend this situation until 2025, which will ensure the extension of the deployment of Russian peacekeepers for at least another five years. This approach is in line with Armenian interests. The continuation of the current status quo is not ideal for Armenia and Nagorno Karabakh, but after the defeat in the 2020 Karabakh war, there are no ideal solutions for Armenia. Armenia faces a choice between two scenarios: to lose Karabakh immediately or to keep the current status quo.

In this context, Russia achieved its primary goal during the Sochi summit. Russia fixed that Armenia and Azerbaijan could not even agree on a joint statement. President Putin stated that the sides decided to delete parts of the statement because of disagreements. Russia’s message is clear: if Armenia and Azerbaijan cannot agree on a statement, how can they agree on a peace agreement? Simultaneously, both Armenia and Azerbaijan confirmed the significant role of the Russian peacekeepers and agreed not to use force or the threat of force. This last remark may deprive Azerbaijan of its main leverage against Armenia: sign a peace treaty on Baku’s terms or Azerbaijan will launch another war and occupy Armenian territory. Of course, the US will continue its efforts to reach an Armenia–Azerbaijan peace agreement, but the Sochi summit created additional obstacles towards the realization of the US plans.