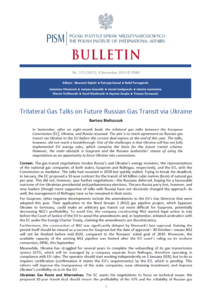 In September, after an eight-month beak, the trilateral gas talks between the European Commission (EC), Ukraine, and Russia resumed. The aim is to reach agreement on Russian gas transit via Ukraine to the EU before the current deal expires at the end of this year. The talks, however, did not reach a breakthrough. One of the challenges is that Ukraine still has not fully implemented EU energy rules, which comprise the basis for the future transit scheme. However, the main obstacle is Gazprom and the Russian authorities’ stance of using the negotiations as an opportunity to force Ukraine into concessions.