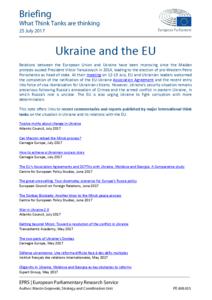 Ukraine and the EU: What Think Tanks are thinking

Relations between the European Union and Ukraine have been improving since the Maidan protests ousted President Viktor Yanukovych in 2014, leading to the election of pro-Western Petro Poroshenko as head of state. At their meeting on 12-13 July, EU and Ukrainian leaders welcomed the completion of the ratification of the EU-Ukraine Association Agreement and the recent entry into force of visa liberalisation for Ukrainian citizens. However, Ukraine's security situation remains precarious following Russia's annexation of Crimea and the armed conflict in eastern Ukraine, in which Russia's role is unclear. The EU is also urging Ukraine to fight corruption with more determination. This note offers links to recent commentaries and reports published by major international think tanks on the situation in Ukraine and its relations with the EU.