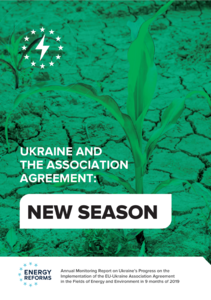 2019 became a year of both ambitious achievements and major challenges. Ratification of the amendments to Annex XXVII of the EU-Ukraine Association Agreement, which became the first «upgrade» of the Agreement since its enactment, was a milestone event. The updated provisions provide for closer monitoring of implementation, as well as extension of the binding EU acquis. Such intensified cooperation in the energy field is aimed at achieving full integration of the Ukrainian and the EU markets. Opening of the retail and later – of the wholesale electricity market in order to comply with Directive 2009/72/EC was another key event.

Many changes have been made through the reforms started earlier, by improving the country’s energy policy in accordance with the European rules. Gas market switched to the daily balancing mode, the unbundling and certification of an independent TSO has started. The monetization of housing subsidies has been implemented, and monetization of benefits initiated. The Energy Efficiency Fund was launched and has started collecting applications for its first products. The renewable energy market is booming, and a law has been passed to move from a feed-in tariff to a more competitive auctions system. A discussion was initiated concerning the grid development, the development of flexible and accumulating capacities. Amendments to the legislation on the use of nuclear energy have been adopted, and the New Safe Confinement has been commissioned at the Chornobyl NPP site.

At the same time, the government, which started its activity at the end of August 2019, faced a number of challenges. On the one hand, the lengthy electoral process has slowed down reforms in the field of energy and environment protection. On the other hand, distortions in gas and electricity markets, partially regulated regimes, situation on the frontline territories in the Eastern Ukraine aggravated the crisis and continued the accumulation of debts. Overdue problems required solutions in all areas reflected in this monitoring, without exception. One of the key challenges to address is continuation of the Russian gas transit through Ukraine’s gas system beyond 2020.

Source: The project “Enhancing impact of civil society in monitoring and policy dialogue on energy and related sectors’ reforms in line with the Association Agreement implementation”