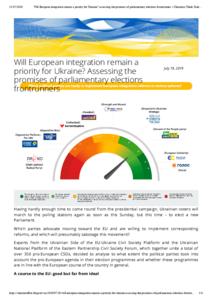 Will European integration remain a priority for Ukraine? Assessing the promises of parliamentary elections frontrunners.

Having hardly enough time to come round from the presidential campaign, Ukrainian voters will march to the polling stations again as soon as this Sunday, but this time – to elect a new Parliament.

Which parties advocate moving toward the EU and are willing to implement corresponding reforms, and which will presumably sabotage this movement?

Experts from the Ukrainian Side of the EU-Ukraine Civil Society Platform and the Ukrainian National Platform of the Eastern Partnership Civil Society Forum, which together unite a total of over 350 pro-European CSOs, decided to analyse to what extent the political parties took into account the pro-European agenda in their election programmes and whether these programmes are in line with the European course of the country in general.

The article was produced in the framework of the Civic Synergy project funded by the European Union and implemented by the International Renaissance Foundation. The analysis of the political parties` programs was conducted by experts of the Ukrainian Side of the EU-Ukraine Civil Society Platform and the Ukrainian National Platform of the Eastern Partnership Civil Society Forum. Among those were experts representing UTTLOB member organizations – the Centre for Global Studies Strategy XXI, the Institute for Economic Research and Policy Consulting (IER), DiXi Group, Resource and Analysis Center “Society and Environment” and others.