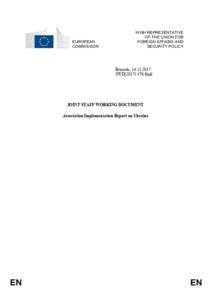 A report produced by the European External Action Service and the European Commission highlights that Ukraine has pursued the implementation of a number of reforms identified in its Association Agenda in 2017, with several significant successes.

Progress in other areas has been less forthcoming, with accelerated implementation needed to bring about real change for the Ukrainian people.

"Since last year's report, we have seen a number of long-awaited achievements. Our Association Agreement entered into force, and Ukrainian citizens were granted visa-free travel for short stay visits to the Schengen area. We now expect the implementation of reforms to be accelerated so that Ukrainian citizens can fully reap the benefits of our partnership. Ukraine can count on the European Union's continued support in order to make this possible”, said the High Representative/Vice-President, Federica Mogherini.

"We remain convinced of the fundamental commitment of the Ukrainian President, government and Rada to deep-seated reform of the country. Of course this has not been a straightforward process: corruption is deep-rooted and there are vested interests that need to be overcome; naturally there are setbacks along the way that we must contend with. We are at times critical, and we insist on certain conditions, yet we are aware of how much Ukraine has already changed, with much more having been achieved in the past three years than in the decades before that, and under very challenging circumstances. The European Union will stick with Ukraine", said the Commissioner for European Neighbourhood Policy and Enlargement Negotiations, Johannes Hahn.