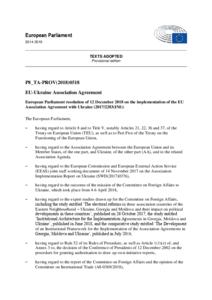 On Wednesday, MEPs acknowledged Ukraine‘s positive reform track, while condemning Russia‘s aggression in the Kerch Strait and the construction of Nord Stream 2.

Parliament adopted a resolution by 433 votes to 105, with 30 abstentions, evaluating the latest developments related to the EU-Ukraine association agreement, which entered into force in 2017.

Progress of reforms in core sectors.

MEPs stress that Ukraine has reformed in areas such as energy, health, pensions, education, public administration and decentralisation, and also when it comes to defence and security, banking and macro-economic stabilisation. These reforms, however, have unfortunately been accompanied by drastic price increases, cuts in social benefits and a deterioration in access to social welfare systems.

MEPs praise Ukraine for good cooperation in the energy sector and its achievements in the areas of energy efficiency and renewables, while pointing out the need to continue to reform, particularly in the gas and electricity market. With Ukraine playing a crucial role in the European energy supply network, MEPs condemn the construction of the Nord Stream 2 pipeline which bypasses Ukraine, “as it is a political project that poses a threat to European energy security”. They therefore call for it to be cancelled.

Crackdown on corruption and oligarchs.

The resolution further underlines that Ukraine should prioritise the fight against corruption, address the problems with oligarch power and continue with decentralisation reforms. MEPs regret that the existing judicial system still remains ineffective, corrupt and politically dependent, yet support the ongoing efforts to address this issue. Judges and prosecutors have to be selected in a more transparent and highly reliable manner, says the text.

Calls on Russia to guarantee freedom of navigation in the Kerch Strait.

MEPs strongly condemn Russia‘s recent aggression against Ukraine on 25 November in the Kerch Strait, and demand the immediate and unconditional release of all Ukrainian vessels and sailors. They are seriously concerned that the tension may constitute a creeping attempt to annex Ukraine‘s sovereign rights in the Sea of Azov. Russia therefore has to guarantee the freedom of navigation through the Kerch Strait and in the Sea of Azov.

The resolution calls on the EU and its member states to introduce targeted sanctions against Russia if the Ukrainian servicemen are not released and if there is any further military escalation.

Finally, MEPs strongly condemn the rising number of physical attacks against civil rights activists and journalists and violence towards members of the Roma and LGBTI communities. They further demand that the Russian Federation must immediately and unconditionally release the 2018 Sakharov Prize laureate Oleg Sentsov and all other illegally detained Ukrainian citizens.

EP rapporteur Michael Gahler (EPP, DE) said: "Ukraine is making good progress in implementing reforms in connection with the EU-Ukraine Association Agreement. However, citizens are not yet enjoying a substantial improvement in their living conditions. The fight against corruption must be carried out in a more determined manner. Steering the European course is the best remedy against Russia’s destabilising actions."

Ukraine signed its association agreement with the European Union in 2014 to strengthen the economic and political ties between the two. It entered into force in 2017.