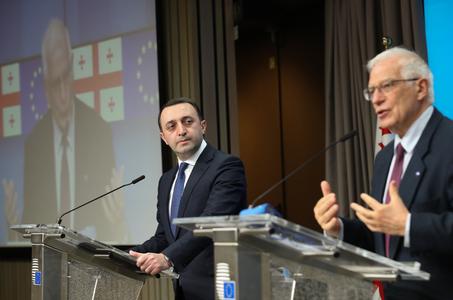 The sides reaffirmed their continued and joint commitment to Georgia's deeper political association and economic integration with the EU in the framework of the Association Agreement and its Deep and Comprehensive Free trade Area (DCFTA). The Association council welcomed the quality and frequency of ongoing high-level dialogue and noted the importance of active follow up on its results. Both sides acknowledged Georgia’s European aspirations, its European choice and the common objective of continuing to build a democratic, stable and prosperous country. The Association council welcomed ongoing negotiations on the Association Agenda for 2021-2027 to set priorities for the implementation of the AA/DCFTA. Georgia outlined its plans to further advance on its European integration path by 2024.

The Association council welcomed Georgia’s progress on its European path, including in the challenging COVID-19 context, and recognised the efforts of the Georgian Government to contain the virus as well as to ensure targeted social assistance to those in need. Both sides acknowledged the crucial importance of the EU rapid assistance to Georgia in the fight against COVID as a vivid sign of solidarity.

The Association council noted that the elections of 31 October and 21 November 2020 were competitive and that, overall, fundamental freedoms were respected. The Association council agreed on the importance of addressing all recommendations related to the shortcomings identified by international observers, including OSCE/ODIHR, through ambitious and inclusive electoral reform in order to strengthen the electoral environment and render it more favourable for the democratic conduct of elections.

The Association council strongly regretted the deepening political polarisation in Georgia. The EU called for a swift resolution to the ongoing political situation, for all parties to step up efforts to de-escalate the situation and come together to identify and agree on common ground. The Association council agreed that it was vital for all actors to continue working, in the EU-supported mediation, to find an early resolution to Georgia’s political crisis.

The Association council reiterated its call on all political actors to work together and to maintain open dialogue in Georgia, including with civil society, in order to further strengthen democratic institutions, consolidate pluralistic democracy and advance reforms. Both sides stressed the need to continue the successful cooperation between the EU and Georgia on strategic communication and countering disinformation.

The Association council welcomed the progress made to date by Georgia in the implementation of reforms in the rule of law and the penitentiary system. The Council also agreed that there are a number of areas where further progress was needed, including by strengthening the independence and accountability of the judiciary and bringing the appointment process for Supreme Court judges in line with European standards.The EU underlined its commitment to continue assisting Georgia in reform of the judiciary and in strengthening the rule of law.

The Association council recalled that a great number of Georgian citizens have benefited from short term visa free travel to Schengen countries in recent years. It welcomed the continuous efforts of Georgia to address violations of the visa-free travel requirements, including the latest legislative amendments to the Law of Georgia on ‘Rules for Georgian citizens on Leaving and Entering Georgia’ and underlined the importance of its effective implementation. The Association council underlined the critical importance of sustained efforts by Georgia to continue to fulfil the visa liberalisation benchmarks, in particular in order to strengthen and maintain the recent decrease in the number of unfounded asylum applications lodged by Georgian nationals in the Schengen + area. The EU encouraged Georgia to further enhance cooperation with EU Member States to counter irregular migration and organised crime. Both sides welcomed a renewed working arrangement signed between Georgia and Frontex, as well as Georgia's acquisition of observer status in the European Migration Network.

The Association council welcomed progress made in the implementation of Georgia's Human Rights Strategy and its Action Plan, as well as the important work of the Human Rights Protection Department of the Ministry of Internal Affairs. The EU recognised Georgia’s efforts in this area and encouraged Georgia to continue efforts to effectively implement the anti-discrimination law and to ensure protection for all persons belonging to minorities, and to ensure gender equality. The Council recalled the commitment to the universality of human rights for all, regardless of religion or belief, race, ethnic origin, sex, language, sexual orientation, gender identity, ability or other. The Association council welcomed substantial progress made by Georgia to create an effective labour inspection system, in order to further improve working conditions and address the challenges in this area in line with international and European labour standards. It also discussed the importance of continuing efforts in this direction.

Both sides welcomed the progress made by Georgia in the implementation of the Association Agreement, including its Deep and Comprehensive Free Trade Agreement (DCFTA). The EU continued to be the most important trading partner of Georgia. The EU and Georgia agreed to identify further products with export potential to the EU, for which EU can provide assistance. Both sides welcomed successful implementation of structural reforms and underlined the importance of ongoing reforms related to the improvement of the investment climate in Georgia. The Association council welcomed the ongoing work to draft a new SME Development Strategy 2021-2025 and the EU side confirmed its readiness to support its implementation.

The Association council welcomed the disbursements of Macro-Financial Assistance to Georgia in November 2020 and urged Georgia to continue the implementation of outstanding agreed policy measures in order to enable the disbursement of the second instalment of COVID Macro-Financial Assistance to Georgia (of which 75 million EUR was disbursed in 2020). The EU encouraged Georgia to ensure the sustainability of already implemented reforms and maintain macro-economic stability.

The Association council reiterated Georgia's strategic role in the field of energy, transport and connectivity and increasingly as a transportation and logistics hub in the region. The EU committed to continue engaging closely with Georgia on the connectivity agenda, including through the gradual completion of the indicative core Trans-European networks of Transport (TEN-T), as a step towards enhancing connectivity and international trade between Europe and Asia. The sides also highlighted the importance of Black Sea connectivity.  The EU took note of Georgia’s request for support in the elaboration and implementation of a plan for better Black Sea connectivity.

The Association council reiterated Georgia's key role as a partner for European energy security and stressed the country's transit role for Caspian hydrocarbon resources to reach European markets, notably via the Southern Gas Corridor and through the Black Sea, with a view to strengthening EU-Georgia interconnections. The EU stressed its continued commitment to further supporting the roll-out of energy efficiency standards in public buildings, based on legislative reforms in key areas. The EU reiterated its continuous support to reinvigorating Georgia’s agriculture and rural sector to improve living conditions in rural areas. The Association council noted the importance of enhanced cooperation in the area of civil protection.

The EU recognised Georgia as a key partner in the region and acknowledged the importance of EU-Georgia cooperation in the field of foreign and security policy. The Association council recalled the issues discussed during the third EU-Georgia Strategic Security Dialogue in October 2019 and looked forward to the next meeting in this format. The EU expressed appreciation for Georgia's continued contribution to EU-led crisis management operations and missions in the Central African Republic and the Republic of Mali, as well as openness to supporting the strengthening of Georgia’s capacities and resilience.

The EU reiterated its firm support for the sovereignty and territorial integrity of Georgia within its internationally recognised borders. The EU reiterated its firm commitment to peaceful conflict resolution in Georgia by using all instruments at its disposal including the policy of non-recognition and engagement. The work of the EU Special Representative for the South Caucasus and the crisis in Georgia and of the EU Monitoring Mission demonstrate this strong commitment.

The Association council took note of the judgement of 21 January 2021 of the European Court of Human Rights Grand Chamber in the inter-State case concerning the armed conflict between Georgia and the Russian Federation in August 2008 and its consequences which concluded that after the 12 August 2008 the Russian Federation, “exercising effective control over Abkhazia and South Ossetia”, violated several provisions of the European Convention of Human Rights.

The Association council stressed the critical importance of the Geneva International Discussions for addressing and resolving the challenges stemming from the conflict between Russia and Georgia in August 2008. It also reiterated that full and effective Incident Prevention and Response Mechanisms (IPRMs) are essential for addressing the safety and humanitarian needs of conflict-affected population on the ground. In this regard, the Council welcomed the resumption of Ergneti IPRM meetings and emphasised the crucial importance of resuming the Gali IPRM.

The Council expressed concern about signing a so-called programme on the creation of a common socio-economic space between Russia and Georgian region of Abkhazia as well as other steps further undermining Georgia’s sovereignty and territorial integrity, deterioration of the security and human rights situation in the Georgian regions of Abkhazia and Tskhinvali/South Ossetia, especially with regard to intensified military build-up, installation of barbed wire fences and other artificial barriers along the dividing lines, long-term closure of “crossing points”. Concerns also include the situation with ethnic discrimination of Georgians, restriction of freedom of movement, including for health care and access to other social services, arbitrary detentions, violation of property rights and education in mother tongue, the persistent obstacles to the safe and dignified return of internally displaced persons and refugees to their places of origin, and deprivation of life of Archil Tatunashvili and Giga Otkhozoria. In this regard, the Association council reiterated that justice should be applied.

The Association council was chaired by the High Representative of the European Union for Foreign Affairs and Security Policy, Mr Josep Borrell. The Prime Minister of Georgia, Mr. Irakli Garibashvili led the Georgian delegation.