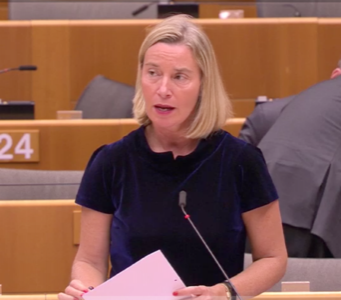 In these five years, the citizens of Ukraine have been calling for change in their country. I say five years, because when I started Ukraine was almost the only issue on our foreign policy agenda. In one sense I am worried that this is slipping away, as if problems were disappearing. I am grateful to the European Parliament for putting this issue on the agenda. It will be also on the agenda of the Foreign Affairs Council next Monday, exactly because I want to make sure that the attention does not get lower at this moment on the situation in Ukraine.

Since our first debate on Ukraine five years ago, Ukraine has come a very long way. This has been possible first and foremost thanks to the determination of the citizens of Ukraine, their constant work for a better country.

Throughout these years, the European Union has always stood at the side of the Ukrainian people.

After 2014 we have put together for Ukraine the biggest support package in the history of the European Union – worth over 15 billion euros. We have invested more in Ukraine than in any other country in the world. And no other partner has invested in Ukraine as much as we have done.

Our Association Agreement – which has now entered into force – is the most ambitious agreement that the European Union has ever developed with any partner. And it has already delivered an impressive increase, for instance, in our trade by almost 50 per cent.

Our support and our cooperation are having a very tangible impact.

We have supported the creation of thousands of new jobs and helped deliver, through decentralisation, higher quality services for the citizens.

We have accompanied the reform of the security sector.

And two years ago, we made travelling to the European Union easier for the people of Ukraine, thanks to visa liberalisation.

I have always believed that the best we could do for the people of Ukraine was to be there for them, was to accompany this quest for change and this quest for reform and this work that they have done themselves to change their country profoundly and to give our full support to this change.

And I believe that the people of Ukraine understand and appreciate and know very well how close we have become in these years.

After his election, President [of Ukraine, Volodymyr] Zelenskyy chose Brussels as the destination of his first foreign trip, and he hosted the EU-Ukraine Summit in Kyiv in July - I was honoured to be there for an excellent meeting that we had. I met Foreign Minister [of Ukraine, Vadym] Prystaiko two weeks ago in New York and he will be with us at the Foreign Affairs Council on Monday in Luxembourg. The very simple message that I – and I would say that both of us - are proud to pass on Monday is this: the European Union and Ukraine have never been closer. This is something we say about other partners, but for Ukraine - if you look at five years ago - this was definitely not to be taken for granted. I believe this is an achievement that we can celebrate together.

The new government has taken a bold approach to reforms. Expectations in public opinion are very high. The number of legislative acts adopted since this summer is unprecedented. And we are ready and willing to support the new government of Ukraine in ensuring that this wave of legislation truly delivers in practical terms.

For instance, we are ready to work with the government as it seeks to review some of the reforms in the judicial field. The citizens of Ukraine expect to see the first results of this push to make their country more transparent and fair for all.

Another extremely important area continues to be the fight against corruption. Improving the business and investment climate and tackling the oligarchic structures is also crucial to unleash Ukraine’s economic potential and, I would say, for having a healthy environment in the country altogether.

We also continue to engage on energy sector reform, and we look forward to the unbundling of gas transmission from production and supply, which should happen by the end of this year. We are also working with Ukraine and Russia through our dialogue to conclude a new gas transit contract.

It is essential to use the current momentum in the best possible way, respecting all democratic procedures and in constant consultation with the country’s vibrant civil society.

Thanks to these reforms and to our concrete support to these reforms – from the creation of the Anti-Corruption Court to security sector reform – Ukraine is today a much stronger country than it was five years ago. That is clearly visible today.

Our neighbours’ strength and resilience is a core interest of the European Union.

At the same time, we should never forget that Ukraine is still suffering a violation of its sovereignty and territorial integrity. Crimea is Ukraine, Donbas is Ukraine. And the European Union will continue to keep this position in the most unequivocal and united manner.

It should be clear that the Minsk agreements remain central to reaching a lasting peaceful solution to the conflict in eastern Ukraine, to end the fighting and the suffering of so many people. It is crucial to sustain the progress in disengagement and constructing the bridge in Stanytsia Luhanska. And we need a lasting ceasefire, towards the ultimate goal of restoring Ukraine’s control of its whole territory.

We have never stopped supporting the work of the Normandy format, the Trilateral Contact Group, and the OSCE. And we will continue to do so until Ukraine’s sovereignty and territorial integrity are fully restored.

In the meantime, we have welcomed the recent exchange of prisoners between Ukraine and Russia. That included the crew of the Ukrainian vessels detained by Russia last November in the Kerch Strait – a situation that we have discussed in the Parliament several times - and Oleh Sentsov, to whom you have awarded the Sakharov Price. This is good news, and we will always encourage any step that can bring us closer to a solution.

We continue to call on Russia to release all illegally detained Ukrainians, and to ensure free passage through the Kerch Strait in accordance with international law.

We are also investing in the infrastructure and security of the south-eastern regions of Ukraine that are affected by the situation in the Kerch Strait.

We should never forget or underestimate these immense challenges that Ukraine is still facing. And at the same, we continue to believe in the immense potential of Ukraine and its people and invest in it.

After five years of work, I am proud of the progress we have achieved together in these years, in extremely difficult circumstances. And I am sure that – with this Parliament’s support – we will continue to stand at Ukraine’s side, as the country’s closest friend.