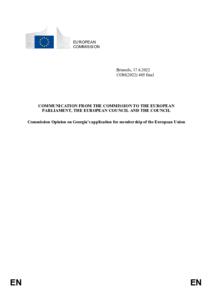 Opinion on Georgia's application for membership of the European Union

Directorate-General for Neighbourhood and Enlargement Negotiations

Presented by the European Commission on June 17, 2022

Since its independence, Georgia has clearly expressed its European aspirations. This European ambition is included in the Georgian Constitution, and is supported by the people of Georgia (83% of Georgians approve joining the EU[1]) and across the political spectrum. This has been a driver for a number of key reforms founded on European values and standards. Georgia's commitment to progress on its European path was underlined by the Government's initial intention to submit an application in 2024.

In this Opinion, the Commission assesses Georgia's application on the basis of its capacity to meet the criteria set by the European Council in Copenhagen in 1993, as well as in Madrid in 1995, notably regarding the country's administrative capacity. The Opinion also takes into account Georgia's efforts in implementing its obligations under the Association Agreement (AA) and Deep and Comprehensive Free Trade Area (DCFTA). The Commission will assess the impact of Georgia's accession on the EU policy areas at a later stage.

Overall, as regards the political criteria, Georgia has a foundation in place to reach the stability of institutions guaranteeing democracy, the rule of law, human rights and respect for and protection of minorities, even if recent developments have undermined the country's progress.

As regards the economic criteria, Georgia has achieved a good degree of macroeconomic stability with a track record of sound economic policy and a favourable business environment. In order to improve the functioning of its market economy, further reforms and investment are needed to ensure long-term inclusive growth and external competitiveness. In order to reinforce the capacity of the country to cope with competitive pressure in the EU, Georgia needs to strengthen in particular its human capital (particularly through education reform) to ensure skills for the labour market and innovativeness, strengthen physical infrastructure including renewable energy generation and transport infrastructure, as well as access to global value chains.

As regards the capacity to fulfil the obligations of membership, Georgia has worked since 2016 on the implementation of the EU-Georgia Association Agreement, including a Deep and Comprehensive Free Trade Area (AA/DFCTA). These agreements already capture an unprecedented amount of the EU acquis. Georgia has gradually approximated to substantial elements of the EU acquis across many chapters. It has an overall positive track record of implementation, while in some sectors the country is more advanced than in others. Overall Georgia has established a solid basis for further alignment.

The Commission therefore recommends to the Council that Georgia should be given the perspective to become a member of the European Union.

The Commission recommends that Georgia be granted candidate status, once the following priorities will have been addressed:

The Commission will monitor Georgia's progress to address these priorities and report on them by the end of 2022.

The accession process remains based on established criteria and conditions. This allows any country in the process to progress based on own merits but also means that steps towards the EU can be reversed if the underlying conditions are not met anymore.

On 3 March 2022, Georgia presented its application for membership of the European Union. The application was tabled in the context of Russia's war of aggression against Ukraine. On 7 March 2022, the Council of the European Union requested the Commission to submit its opinion on this application. EU Heads of State and Government endorsed this decision at the informal leaders meeting in Versailles[2]. Georgia received questionnaires on 11 April 2022 on the political and economic criteria and on 19 April on the EU acquis chapters and provided its replies on 2 May and on 10 May.

[1] According to the January 2022 National Democratic Institute (NDI) survey.