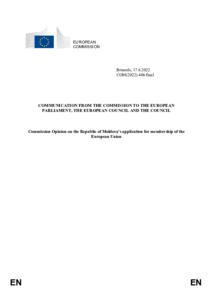 Opinion on Moldova's application for membership of the European Union

Directorate-General for Neighbourhood and Enlargement Negotiations

Presented by the European Commission on June 17, 2022

In the past two years, the Republic of Moldova (hereinafter Moldova) has taken a decisive step towards reforms, with a clear mandate from its citizens. Following the 2020 presidential and 2021 parliamentary elections, there is a clear alignment of the presidential, executive and legislative powers on a pro-reform, anti-corruption European path for the first time since independence. This follows a period where the independence of key institutions was seriously compromised.

The Russian war of aggression against Ukraine is having serious effects on Moldova. In a real spirit of solidarity and upholding European values, Moldova is actively supporting those fleeing Ukraine, hosting the highest number of refugees per capita. Despite this challenge, the Moldovan government is strongly committed to delivering on its clear reform goals – notably as regards judicial reform, public administration reform and the modernisation of the economy – to benefit the people of Moldova. Recent Eurobarometer survey results show increased support for EU integration and that the EU is the most trusted foreign organisation.

In this Opinion, the Commission assesses Moldova's application on the basis of its capacity to meet the criteria set by the European Council in Copenhagen in 1993, as well as in Madrid in 1995, notably regarding the country's administrative capacity. The Opinion also takes into account Moldova's efforts in implementing its obligations under the Association Agreement (AA) including a Deep and Comprehensive Free Trade Area (DCFTA). The Commission will assess the impact of Moldova's accession on the EU policy areas at a later stage.

Overall, as regards the political criteria, Moldova has a solid foundation in place to reach the stability of institutions guaranteeing democracy, the rule of law, human rights and respect for and protection of minorities.

As regards the economic criteria, Moldova has pursued reasonably sound macroeconomic policies, significantly strengthened financial sector stability, and improved the business environment. Moldova needs to address inefficiencies to attract more foreign private investment and enhance public and private investments in strategic infrastructure, education and innovation. Key areas for improving the functioning of its market economy also include reducing corruption and pursuing justice reforms, the enforcement of property rights, further development of a more dynamic business environment as well as better corporate reform of the governance of state-owned enterprises sector with a view to reducing its size. Similarly, improvements are needed in energy security to reduce the energy intensity of the economy and society. Furthermore the country's capacity to cope with the competitive pressure in the EU will depend on a more robust and diversified job market and the reduction of the labour force drain, improving Moldova's growth potential and external competitiveness.

As regards the capacity to fulfil the obligations of membership, Moldova has worked since 2016 on the implementation of the EU-Moldova Association Agreement, including a Deep and Comprehensive Free Trade Area (AA/DFCTA). These agreements already capture significant amount of the EU acquis and Moldova has gradually taken up the alignment process across many chapters and has a satisfactory track record of implementation, while in some sectors the process is more advanced than in others. Overall, Moldova has established a solid basis for further alignment.

The Commission recommends to the Council that Moldova should be given the perspective to become a member of the European Union.

The Commission recommends that Moldova be granted candidate status, on the understanding that the following steps are taken:

The Commission will monitor Moldova's progress in fulfilling these steps and report on them, together with a detailed assessment of the country, by the end of 2022.

The accession process remains based on established criteria and conditions. This allows any country in the process to progress based on own merits but also means that steps towards the EU can be reversed if the underlying conditions are not met anymore.

On 3 March 2022, the Republic of Moldova presented its application for membership of the European Union. The application was tabled in the context of Russia's war of aggression against Ukraine. On 7 March, the Council of the European Union invited the Commission to submit its Opinion on the application. EU Heads of State and Government endorsed this decision at the informal leaders' meeting in Versailles[1]. Moldova received questionnaires on 11 April 2022 (on the political and economic criteria) and on 19 April (on the EU acquis chapters) and provided its replies on 22 April and on 12 May, respectively.