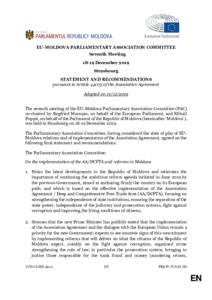 The seventh meeting of the EU-Moldova Parliamentary Association Committee (PAC) co-chaired by Siegfried Mureșan, on behalf of the European Parliament, and Mihail Popșoi, on behalf of the Parliament of the Republic of Moldova (hereinafter 'Moldova'), was held in Strasbourg on 18-19 December 2019.

The Parliamentary Association Committee, having considered the state of play of EU-Moldova relations and of implementation of the Association Agreement, agreed on the following final statement and recommendations.