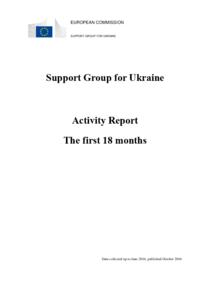 This report provides an account of the activities of the Support Group for Ukraine in the course of its first eighteen months of full operation (from approximately September 2014 to the first half of this year). The Support Group was created in Spring 2014 on the initiative of the President of the European Commission, in response to the appointment of a reform-minded government following the dramatic events of the previous Winter. It was swiftly realised that for Ukraine to survive the early crisis period, and ultimately to fully achieve and draw maximum benefit from political association and economic integration with the EU, it would have to realise fundamental and systemic governance and economic reforms.