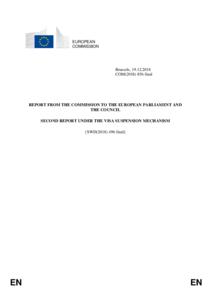 The Commission is today reporting on its assessment of the fulfilment of the visa liberalisation benchmarks by the Western Balkan countries: Albania, Bosnia and Herzegovina, the former Yugoslav Republic of Macedonia, Montenegro and Serbia as well as the Eastern Partnership countries: Georgia, Moldova and Ukraine. This annual report shows that the visa liberalisation requirements for the concerned countries continue to be met but that action – in some cases immediate – is required for a number of countries in specific areas to ensure this continues to be the case.

Commissioner for Migration, Home Affairs and Citizenship Dimitris Avramopoulos said: "Visa free travel with our Western Balkan and Eastern European partners is a great achievement which brings benefits for both sides. It also comes with responsibilities and obligations. I welcome that all concerned countries continue to fulfil their obligations, but call for swift and enhanced efforts to continue curbing irregular migration, and fighting corruption and organised crime."

Visa-free travel brings important benefits for Europe and its partners, reinforcing social, cultural and economic ties. It also comes with responsibilities to ensure that the progress achieved during the visa liberalisation dialogues is maintained and that the migration and security environment is well managed. Today's report follows up on the Commission's recommendations from December 2017 and takes stock of the measures implemented by the concerned countries in the past year.

All 8 countries have taken measures to address irregular migration, however further efforts are needed to improve and ensure sustainable results:

Closer cooperation of the European Border and Coast Guard with the Western Balkans partners will help manage irregular migration. The first status agreement was signed with Albania; Serbia and the former Yugoslav Republic of Macedonia have initialled their agreements; and procedures are being finalised for Montenegro and Bosnia and Herzegovina.

Despite measures taken to fight organised crime, further reinforced efforts are needed from all 8 countries. Immediate action as regards corruption is required from Moldova and Ukraine:

The Commission will monitor the continuous fulfilment of the visa liberalisation requirements and will report to the European Parliament and the Council at least once a year.

Today's report follows up on the Commission's obligation under the strengthened visa suspension mechanism, adopted in March 2017, to monitor the continuous fulfilment of visa liberalisation requirements by third countries and to report to the European Parliament and the Council at least once a year. Today's report is the second under the new Visa Suspension Mechanism, following the first report issued in December 2017.

The assessment of the visa liberalisation benchmarks applies to countries which have successfully concluded visa liberalisation dialogues according to relevant action plans and roadmaps, i.e. Western Balkan and Eastern Partnership countries. The report focuses on the areas where further work is necessary to achieve sustainable progress.

Citizens of Montenegro, Serbia and the former Yugoslav Republic of Macedonia can travel to the EU without a visa since December 2009. For citizens of Albania and Bosnia and Herzegovina, this is possible since the end of 2010. For Moldova visa-free travel entered into force in April 2014, for Georgia in March 2017 and for Ukraine in June 2017.