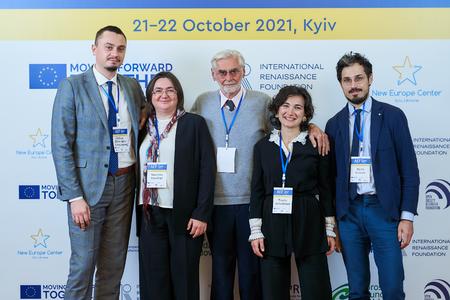 On October 21-22, the members of the “3DCFTAs Project” took part in the 4th Association Exchange Forum in Kyiv that was organized by the International Renaissance Foundation and the New Europe Center within the EU-funded EU4USociety project, in partnership with the Institute for European Policies and Reform (Chișinău), the EU integration program of the Open Society Georgia Foundation and co-funded by Soros Foundation Moldova.

On the second day of the conference, Michael Emerson and Tinatin Akhvlediani (CEPS), Veronika Movchan (IER), and Denis
Cenusa (Expert-Grup) presented some of the findings of the projects’ work at the panel “DCFTAs: still for purpose?” moderated by Kataryna Wolczuk (Chatham House) (see the video recording here).

Below you will find the main points raised by each speaker.

1)  We have “blind spots” when talking about the trade part. For instance, the issues of road permits for Ukrainian carriers by the Member States was not expected to be a problem. It is a bilateral issue that creates a barrier for EU-UA trade.

2)  DCFTAs are not carved in stone: there are new spheres that are not fully covered or not covered at all in DCFTAs since they have developed after the AA/DCFTA was negotiated (Digital Single Market, Transport Union, Energy Union). Ukraine tries to bring this into the agenda.

“YES,” fit for purpose: political and regulatory norms are a long-term game.

“No”: there is a need for fresh political momentum. There is no answer on “what is next” after AAs/DCFTAs?

1)    Associated Trio should be prioritised, while the EaP put on the 2nd role. The trio should be regarded as Europe’s Eastern frontline for European values given the Russian threat remains. It is clear for all of us that the Joint Staff document heading into the EaP summit is not motivating Azerbaijan and Belarus to move closer to Europe – it does not work that way. However, by not emphasising the Trio it is communicating discouraging messages to the Trio.

2)    Green Deal: more interesting for Ukraine, but also for the other two. CBAM negative effect should be mitigated, while the Green transition should be pushed through.

P.S. The findings of the 3DCFTAs Project were used in the publication “Implementation of Association Agreements in Georgia, Moldova and Ukraine: a comparative overview 2021” presented during the 4th Association Exchange Forum.