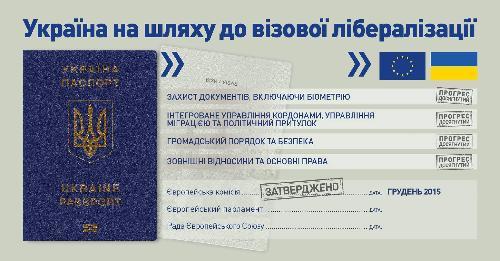 Following the positive assessment of the progress report and taking into account the overall EU-Ukraine relations, the Commission will present in early 2016 a legislative proposal to the Council and the European Parliament to lift visa requirements for Ukrainian citizens holding a biometric passport - amending Regulation (EC) No 539/2001.

Commissioner for Migration, Home Affairs and Citizenship, Dimitris Avramopoulos welcomed the enormous progress made by Ukraine: "I am very pleased that Ukrainian citizens with a biometric passport will soon be able to travel to the Schengen area for short stays without a visa. I congratulate the Ukrainian leadership on the progress made towards completing the reform process which will bring important benefits to the citizens of Ukraine in the future. The hard work towards achieving this significant goal has paid off. Now it is important to keep upholding all the standards."

The progress achieved by Ukraine in the implementation of the second phase benchmarks has been noteworthy, in particular given the exceptional circumstances and the internal and external challenges the country faces. Based on the Commission's assessment, the commitments taken by the Ukrainian leadership, and the outcome of the continuous monitoring and reporting carried out since the launch of EU-Ukraine Visa Liberalisation Dialogue in October 2008, the Commission considers that Ukraine meets all the benchmarks set in respect of the four blocks of the second phase of the Visa Liberalisation Action Plan.

The visa-free travel will apply to all EU Member States, except for Ireland and UK, as well as the four Schengen associated countries (Iceland, Liechtenstein, Norway and Switzerland). The exemption from visa requirement concerns only short-stays, up to 90 days in any 180-day period for business, touristic or family purposes.

The EU-Ukraine Visa Dialogue has been an important and effective tool for advancing far-reaching and difficult reforms in the Justice and Home Affairs area and beyond, impacting on areas such as the rule of law and justice reform. The progress achieved by Ukraine in all areas covered by the four blocks of the VLAP has been steady and effective. It demonstrates the commitment and constant efforts of the Ukrainian Government and all state institutions that have made the fulfilment of the VLAP benchmarks a top national priority.

The enhanced mobility of citizens in a secure and well-managed environment is one of the core objectives of the Eastern Partnership. To this end, the EU carries out Visa Liberalisation Dialogues with interested partner countries.

The main tool of the dialogue is the Visa Liberalisation Action Plan which is tailor-made for each partner country and structured around four blocks concerning i) document security, including biometrics; ii) integrated border management, migration management, asylum; iii) public order and security; and iv) external relations and fundamental rights. These benchmarks were set with a view to adopting a legislative, policy and institutional framework (phase 1) and ensuring its effective and sustainable implementation (phase 2).

The EU-Ukraine Visa Liberalisation Dialogue was launched on October 2008 and the VLAP was presented to the Ukrainian authorities on November 2010.

In September 2011, the Commission adopted its first progress report on Ukraine's implementation of the VLAP and made several recommendations for completing the first (legislative and planning) phase. The Commission published its second progress report on 9 February 2012, and the third on 15 November 2013. Following the Commission's fourth report on 27 May 2014 and its endorsement by the Council on 23 June 2014, Ukraine was officially in the second phase of the action plan where an assessment was made regarding sustainable implementation of the legislative and policy framework.

The Commission adopted the fifth progress report on Ukraine’s implementation of the VLAP on 8 May 2015. Today's report is the sixth and last progress report.