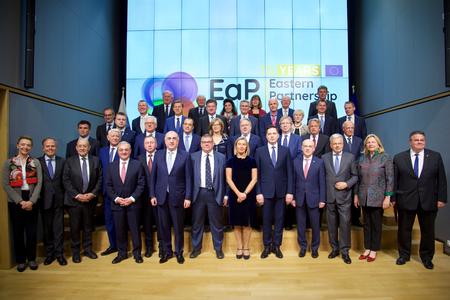 2. On 13 May 2019, the Foreign Ministers and representatives of Member States of the European Union, the High Representative of the Union for Foreign Affairs and Security Policy and the Foreign Ministers of the six Eastern European Partners met in Brussels to celebrate the 10th anniversary of the Eastern Partnership, to reiterate its importance, to celebrate its success and achievements so far, as well as to reflect on the future of our continued strategic and ambitious partnership.

3. This unique policy is based on shared fundamental values and our joint commitment to the principles and norms of international law, human rights including rights of persons belonging to minorities, democracy and rule of law, accountability and good governance, including the fight against corruption, sustainable development and market economy. It is governed by principles of shared ownership, joint responsibility, inclusivity, differentiation and conditionality, and based on our joint priorities. This is the moment to renew our unwavering support for these fundamental values and principles which lie at the heart of our Partnership; to reaffirm the joint commitments enshrined in the Eastern Partnership Summit declarations; and to underline our firm intention to carry them forward.

4. Over the years, the Eastern Partnership has proved to be an efficient, resilient, tailored and dynamic framework. It has served to develop, to adapt to new challenges, including those to stability and resilience, and ultimately to strengthen our mutually beneficial relationship. The Eastern Partnership has been updated to support the delivery of the key global policy goals set by the UN 2030 Agenda for Sustainable Development and the Paris Agreement on Climate Change, also reflecting the revised European Neighbourhood Policy as well as the EU Global Strategy.

5. Since 2009, the Eastern Partnership has provided a solid foundation to further deepen cooperation, both at bilateral and multilateral levels, including through a broad range of Agreements and other instruments such as Partnership Priorities, and allowed us to achieve important accomplishments. The Eastern Partnership has evolved and continuously broadened its areas of cooperation, delivering tangible results to citizens and accelerating political association, economic integration and enhanced partnership between the EU and interested partners. The 20 deliverables set for 2020 further focused on practical cooperation, thereby promoting economic development and market opportunities, strengthening democratic institutions, good governance and rule of law, promoting connectivity, energy efficiency, environmental protection and climate change mitigation, as well as fostering mobility and people-to-people contacts. Through the Eastern Partnership, EU Member States and Eastern Partners have developed a better understanding of mutual needs, ambitions and expectations.

6. This Partnership benefits us all; 10 years on from its creation, it has proven to be a success for our citizens. This positive experience enables us to continue to work jointly and in a spirit of close cooperation to ensure our societies can fully reap all the benefits, from increased prosperity to democracy, stability and security that come from such a Partnership.

7. Further challenges lie ahead. Reform implementation and delivery of the agreed commitments must remain the main focus in the years to come, with the objective of preserving and sustaining the Partnership’s positive impact and continued success, and in full respect of its values and principles. In this context, civil society, including think tanks and human rights defenders, as well as vulnerable groups, journalists and other media actors, women, young people, and the private sector play an important role. We have agreed on a set of concrete projects that shall contribute to a 'new deal' for the youth of the Partner countries.

8. Our achievements, such as increased trade and strengthened political association, economic integration and sectoral cooperation between the EU and interested partner countries, will serve as an inspiration for further progress in the future based on mutual interests, needs, joint priorities and sustainable reform implementation. We need to continue the structured reflection and engage in an inclusive and broad consultation process on our future cooperation agenda, notably with a view to ensuring substantive and timely preparations for the next EaP Summit. Let us demonstrate our shared determination to develop the Eastern Partnership agenda beyond 2020, ensuring that we will remain stronger together.