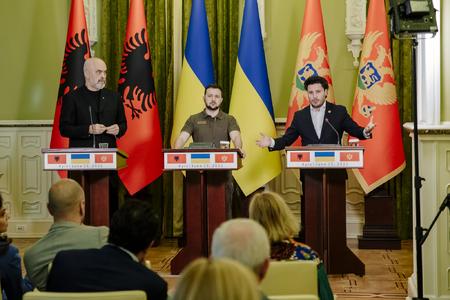 The President of Ukraine informed about the decision at a briefing with the prime ministers of Albania and Montenegro in Kyiv, an Ukrinform correspondent reports.

Before the meeting at the Office of the President of Ukraine, the prime ministers of Albania and Montenegro visited the towns of Kyiv region liberated from Russian aggressors to see the consequences of hostilities with their own eyes.

Zelensky pointed out the uniqueness of such a meeting and called it a summit of Ukraine and the leaders of the Western Balkan countries. The President specified that the prime ministers of Montenegro and Albania had arrived in Kyiv in person, while the Prime Minister of North Macedonia had joined the talks via a video link.

"Our meeting shows the support from the honorable prime ministers and, therefore, the peoples of these countries, the support for Ukraine, our territorial integrity, our sovereignty, our path towards full-fledged membership in the European Union, and, last but not least, the need to hold all Russian war criminals accountable for everything they have done against Ukraine and against Europe on our land," the President of Ukraine said.

He noted that during the meeting, in particular, defense cooperation between the countries had been discussed.

"I am grateful to Mr. Rama, Mr. Abazović, and Mr. Kovačevski for adopting a joint statement following our talks in support of granting Ukraine the status of a candidate for membership in the European Union," the President of Ukraine said.

Zelensky thanked the prime ministers for supporting Ukraine during the war.

"Our countries – Ukraine, the Republic of Albania, Montenegro, the Republic of North Macedonia – must become full-fledged members of the European Union. We agree that our countries are not competitors on this European path, but only complement and strengthen each other's capabilities," the President of Ukraine added.

He stressed that reinforcing the unified positions on the continent, enhancing coordination between European countries, and overcoming differences between the so-called "old" and "new" members of the European Union should become the response to Russia's anti-European policy.

In addition, Zelensky underscored the importance of eliminating any "grey" areas in Europe.