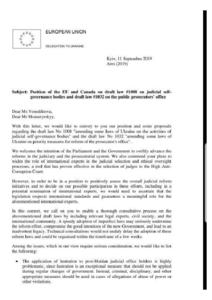 The EU Delegation to Ukraine and the Canadian Embassy in Ukraine have sent a joint letter to the Office of the President, in which they expressed their position on bill No. 1008 on amendments to some laws of Ukraine regarding the activities of judicial self-governance bodies.

The September 11 letter says that the EU and Canada in general welcome the intention of the Ukrainian parliament and government to fast-track the reform of the judiciary and the prosecution system, however, a number of provisions of bill No. 1008 need to be finalized, the sud.ua judicial publication said. Read also Ukraine has no other way but to implement reform, get rid of corruption – media.

In particular, the ambassadors criticized the provisions regarding a reduction in the number of judges of the Supreme Court.

"Any reduction of the number of Supreme Court judges should be based on a thorough analysis of its current structure, workload and jurisdiction. Enhanced procedural filters and optimisation of the court structure could allow a gradual reduction of its workload and thus permit cutting the number of judges, while at the same time respecting international standards on the independence of judiciary," the letter says.

Also, the ambassadors raised a number of questions regarding the process of reforming the High Qualification Commission of Judges, in particular, as for the role of international experts in the selection of members of the commission, as well as the creation of a commission on ethics and integrity under the High Council of Justice.

"A reboot of the High Qualification Commission and the creation of the new Ethics and Integrity Commission will remain ineffective, unless also the High Council of Justice is reformed," the letter said.

The Western partners also told the Ukrainian authorities that the judicial reform will be closely watched by the business community and foreign investors, because "a predictable and independent judicial system is key to attract and maintain much needed investment.

"In addition, they recalled that the EU and Canada have been major partners of Ukraine over the past few years and as part of the partnership, the latter had been provided with significant political, financial and technical support in a number of sectors.