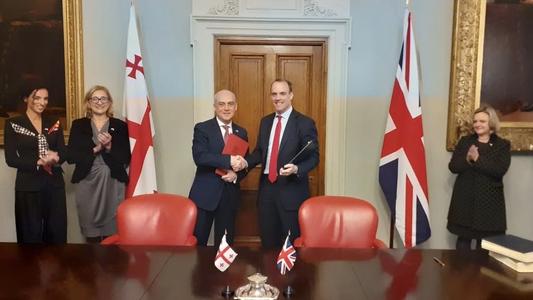 Georgia and the UK signed Strategic Partnership and Cooperation Agreement

Georgia and the United Kingdom (UK) have signed a Strategic Partnership and Cooperation Agreement earlier today, which is the first deal in the region which will come into play after Brexit takes places and ensure free trade between Georgia and the UK after the country leaves the EU.

The agreement, which was signed by Georgian Foreign Minister David Zalkaliani and the UK Foreign Secretary Dominic Raab in London, “takes strategic cooperation between Georgia and the UK to a new level” and covers different fields of cooperation, the Georgian foreign Ministry reports.

Cooperation described in the document covers the following issues and fields:

The agreement ensures free trade between Georgia and the EU, as it duplicates the notes of the EU-Georgia Association Agreement,” the Georgian Foreign Ministry reports.

Zalkaliani reiterated that the agreement will replace the EU-Georgia Association Agreement after Brexit, after the UK officially leaves the EU on October 31, 2019.

It is a very important day in UK-Georgian relations,” Zalkaliani said. “Signing the agreement with Georgia several days before Brexit indicates at the importance of Georgia for the UK,” he added.

Zalkaliani stated that Georgia will retain UK support both in bilateral and multilateral formats, and in all international formats.