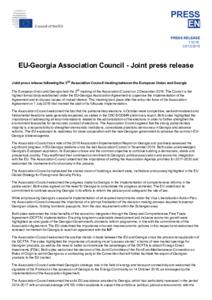 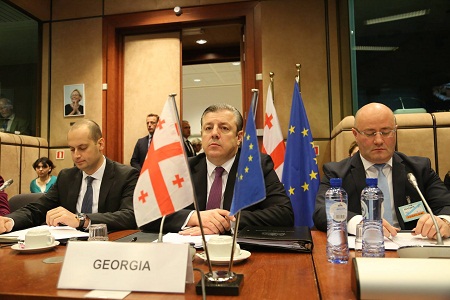 The Association Council welcomed the fact that the parliamentary elections in October were competitive, well-administered and fundamental freedoms were generally respected, as stated in the OSCE/ODIHR preliminary report. Both sides highlighted the importance of addressing all recommendations related to the administration of the elections in order to further strengthen the environment favourable for democratic conduct of elections. The Association Council agreed that the strong parliamentary majority is a responsibility to strengthen democratic institutions, consolidate pluralistic democracy in Georgia and advance reforms. The EU expressed its readiness for close cooperation with the new Georgian government to advance the common EU-Georgia bilateral agenda.

The Association Council took note of the 2016 Association Implementation Report on Georgia and positively assessed the significant progress in EU-Georgia relations since the last Association Council in November 2015. Both sides acknowledged Georgia's European aspiration, its European choice and the common objective to continue building a democratic, stable and prosperous country. They reaffirmed their continued commitment to Georgia's political association and economic integration with the EU. The Association Council underlined the importance of setting the Association Agenda priorities for 2017-2020 and welcomed the involvement of civil society in this process.

The Association Council emphasized the shared vision of building a resilient state, institutions and society highlighted in the EU Global Strategy for Foreign and Security Policy.

The Association Council welcomed the progress made by Georgia in the implementation of comprehensive reforms in the justice sector. Both sides agreed on the need for Georgia to consolidate the progress achieved. The EU underlined its commitment to continue assisting Georgia in its efforts to reform the judiciary and safeguard the rule of law.

While emphasising Georgia's successful implementation of all required benchmarks under the Visa Liberalisation Action Plan, the Association Council stressed the importance of a prompt finalization of the decision making process required to exempt Georgian citizens, holding biometric passports, from the visa requirement within the Schengen area.

Both sides welcomed the initial benefits of the economic integration through the Deep and Comprehensive Free Trade Agreement (DCFTA) implementation. Ensuring long-term sustainable development and inclusive economic growth were highlighted as core goals of the Georgian Government's domestic reform programme, in line with the commitments of the Association Agreement. The EU underlined the importance of sound macroeconomic policies in this respect and welcomed the renewed momentum for Georgia to reach an agreement with the IMF.

The Association Council welcomed the positive trends in trade between the EU and Georgia since the provisional application of the DCFTA. The sides highlighted the importance of creating more “success stories” in terms of new market openings for Georgian products, as well as the need to better communicate the advantages of the DCFTA to attract Foreign Direct Investments (FDIs). Both sides welcomed the decision of the Joint Committee of the Pan-Euro-Mediterranean Convention on Rules of Origin to admit Georgia as a contracting party to the Convention that will further facilitate the export of Georgian products to the EU market.

The Association Council underlined Georgia's strategic role in the field of energy and transport connectivity and welcomed the signature of the Protocol on the accession of Georgia to the Energy Community on 14 October 2016, as envisaged by the implementation of the Association Agreement.

The Association Council welcomed the solid EU assistance provided to Georgia, which had particularly increased in the period 2014-2017 with an annual average of €100 million available to support the ambitious political, judicial and economic reforms envisaged in the Association Agreement and the Association Agenda. The Association Council underlined the importance of the promotion of EU investments in the Georgian economy and welcomed a proposal to focus future assistance for 2017-2020 on Economic Growth, Private Sector Support and developing efficient value chains and increased competitiveness in selected sectors with high export potential and/or import substitution.

Both sides welcomed and stressed the importance of successful cooperation established between the EU and Georgia on Strategic Communication.

The EU expressed readiness to assist Georgia's increased participation in EU programmes in order to bring tangible results to the population. The Association Council commended Georgia's growing cooperation with the EU agencies and welcomed further steps in this direction. The Association Council encouraged the strengthening of sectoral cooperation through enhanced dialogue between the relevant EU and Georgian institutions and use of all available EU instruments.

The EU reiterated its firm support for the territorial integrity of Georgia within its internationally recognised borders, as well as its firm commitment to peace, stability and conflict resolution in Georgia. To this end, the EU is committed to using all instruments at its disposal through a comprehensive approach, including its policy of non-recognition and engagement in Georgia. The EU Special Representative for the South Caucasus and the Crisis in Georgia and the EU co-chairmanship of the Geneva International Discussions, the EU Monitoring Mission in Georgia (EUMM) are visible and substantial signs of this commitment.

The Association Council stressed the crucial importance of the Geneva International Discussions for addressing and resolving the challenges stemming from the conflict in Georgia. It also agreed that fully functional Incident Prevention and Response Mechanisms (IPRMs) are essential for confidence, predictability and transparency on the ground. The contribution of the EU Monitoring Mission to security and stability on the ground was particularly highlighted.

The Association Council was deeply concerned with the recent ratification of the so-called agreement between the Russian Federation and the Georgian region of Abkhazia on the creation of a “joint group of military forces” and considered this step detrimental to security and stability in the region. The EU underlined that this so-called agreement, similar to the earlier so-called “Agreement on the State Border” between the Russian Federation and the Georgian region of Tskhinvali region/South Ossetia, and the so-called “Treaties” signed between the Russian Federation and the two Georgian regions of Abkhazia and Tskhinvali region/South Ossetia, have no legal status for the EU. These so-called agreements violate international law, including the principles of inviolability of Georgia's sovereignty and territorial integrity within its internationally recognised borders.

The Association Council called on the Russian Federation to fulfil its obligations under the ceasefire agreement of 12 August 2008 and its subsequent implementing measures of 8 September 2008, and to provide EUMM access to the Georgian regions of Abkhazia and Tskhinvali region/South Ossetia. Both sides expressed concern over the human rights situation in these  regions, including with regards to freedom of movement and access to education in native language in the Georgian region of Abkhazia.

The Association Council agreed on the importance of continuing and intensifying a broad policy that includes the whole society and encouraged Georgia to sustain its efforts to reach out to its communities throughout its entire territory. The Association Council noted the importance of further supporting people-to-people contacts across the divide and confidence building measures between conflict-affected communities and encouraging reconciliation efforts.

The EU expressed appreciation for Georgia's continued contribution to EU-led crisis management operations and missions in the Central African Republic and the Republic of Mali, as well as readiness to support strengthening of respective capacities of the country.

The EU commended Georgia's active participation in the multilateral dimension of the Eastern Partnership. It welcomed Georgia's contribution to the ENP review and elaboration of the Global Strategy for Foreign and Security Policy. The Association Council underlined the importance of translating the strategies into clear and concrete policy priorities and deliverables.

The Council was chaired by the High Representative of the European Union for Foreign Affairs and Security Policy, Ms. Federica Mogherini. The Prime Minister of Georgia, Mr. Giorgi Kvirikashvili led the Georgian delegation consisting of members of the Government of Georgia.