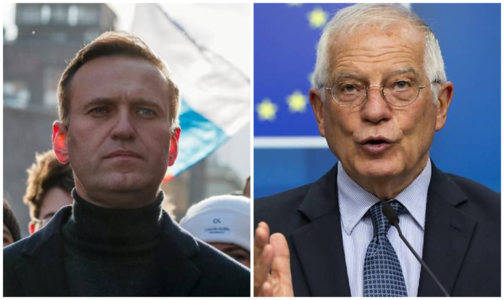 Poisoning of Alexei Navalny: Remarks by the HRVP Josep Borrell

Let us have a look at the situation – as you have requested - in Russia, particularly at the poisoning of the opposition leader, Mr Alexei Navalny, which has shocked all of us.

I personally issued two statements immediately after these events happened, on the 24th of August and on the 2nd of September, and the 27 EU Member States issued a Declaration on the 3rd of September.

The German government confirmed, on the 2nd of September, that Mr Navalny has been poisoned by a military chemical. Yesterday we learnt that French and Swedish laboratories have ratified this conclusion.

There is now irrefutable evidence that a nerve agent of the “Novichok” group, similar to the one used in the assassination attempt on Sergei and Yulia Skripal in March 2018, was used to try to assassinate Mr Navalny.

The use of chemical weapons by anyone, anywhere, at any time and under any circumstances, constitutes a serious breach of international law and international human rights standards.

We keep calling upon the Russian authorities to cooperate fully in this investigation and particularly with the Organisation for the Prohibition of Chemical Weapons (OPCW).

This is what I have to inform you of, distinguished Members of the European Parliament.

We continue calling on Russia to investigate this crime through a fully transparent procedure, under the auspices of the Organisation for the Prohibition of Chemical Weapons. We can expect that the poisoning of Mr [Alexei] Navalny will have an impact on European Union-Russia relations. We are going to discuss that in the next Foreign Affairs Council.

Some of you talk about the possibility of this affecting Nord Stream 2. Once again, this is something that is outside of the possibilities of the European institutions. What I can tell you is that the European Commission has never shown a lot of enthusiasm about this pipeline, which from the Commission we have been considering as not a relevant priority infrastructure. But it is something that is up to the Member States that have been pushing for this infrastructure to be built. As I said, there is the scepticism of the Commission, which has never shown strong support for it.

Finally, about the possibility of sanctioning Russia with a kind of “Magnitsky-style” [human rights sanctions] regime: When I took office, I immediately launched [negotiations for] a global human rights sanctions regime, which has been discussed once again at the last Foreign Affairs Council. [There are] continued discussions in the Council. The legal acts are currently being drafted.

Mr President, thank you very much.