Presentation of the 3DCFTAs Handbooks in Kyiv: Post-Event Report

European Progress and Prospects of Ukraine - What has changed since the signing of the Association Agreement?

On November 19, 2018, a conference "European Choice for Ukraine: Progress and Prospects" was held in Kyiv. It was organized jointly by the Institute for Economic Research and Policy Consulting (IER) and the project "Civiс Synergy".

The conference was organized within the framework of the project "Understanding Association Agreements and Deep and Comprehensive Free Trade Areas of the EU with Ukraine, Moldova and Georgia", implemented by a consortium headed by the Center for European Political Studies (CEPS) with the financial support of SIDA, as well as the project "Civic Synergy " funded by the EU and co-funded and implemented by the International Renaissance Foundation. 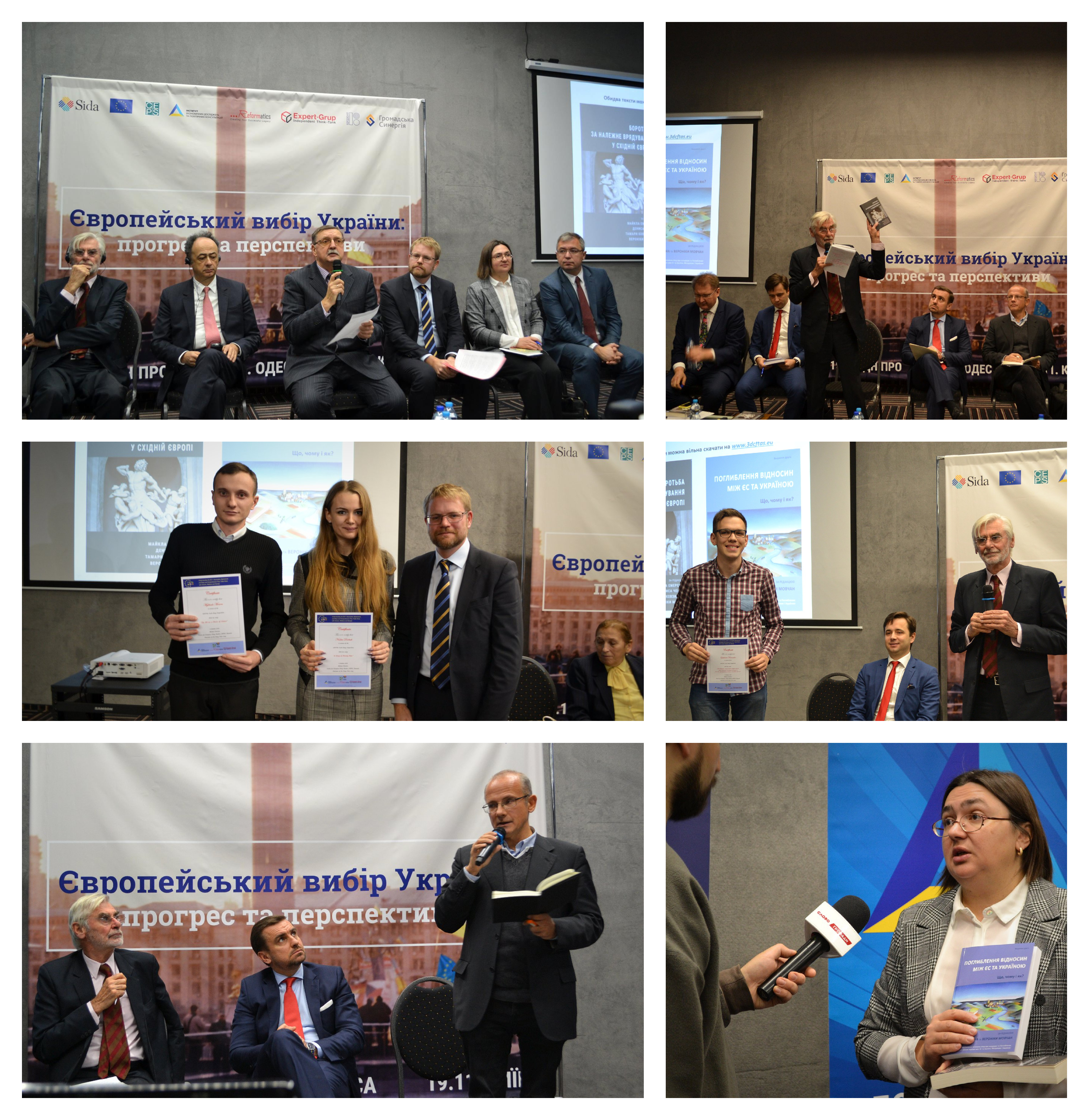 Two books were presented at the conference: "Deepening Relations between the EU and Ukraine: What, Why and How?" (second edition) and "The Struggle for Good Governance in Eastern Europe", prepared by the Ukrainian-European team of researchers led by Michael Emerson (CEPS) and Veronika Movchan (IER). The first book became famous as "the Bible of the Association Agreement between Ukraine and the EU".

Like two years before, the presentation of the second edition of the book "Deeper Relations between the EU and Ukraine: What, Why and How?" was opened by the extraordinary and plenipotentiary ambassador of Sweden Martin Hagström. He spoke about his participation in creating the Association Agreement with Ukraine in 2007 (as the representative of Sweden in Brussels). For Sweden, the Association Agreement is very important - it helps to understand how to make more effective use of the annual financial assistance package worth EUR 20-25 million, which Sweden allocates for the implementation of reforms in Ukraine. Mr. Ambassador calls the Agreement a very complex document, to which "many refer, but few read." He recommends the book for those who want to understand where Ukraine is now in the process of European integration.

Oleksandr Sushko, chairman of the International Renaissance Foundation, noted that although the pro-European mood remains high today, there are serious risks that reforms may be stopped after the presidential and parliamentary elections in 2019. Because of the "Euro-skeptic" mood in the EU, the supporters of European unity also lose their positions in other countries. In the long run, it is necessary to support the eurointegration by explaining it to the public.

The Head of the EU Delegation to Ukraine Hugues Mingarelli noted that Ukrainian civil society plays a significant role in implementing reforms and relations with the EU. According to Mr. Mingarelli, this is the best guarantee that after the 2019 elections Ukraine will not return to the positions where it was 10 years ago. “Euromaidan became the high price paid by the Ukrainian society for the Association Agreement, so we are responsible for making the Agreement successful” – said Mr. Mingarelli. The EU is struck by the fact that Ukraine continues to implement reforms, despite the fact that the country is in a state of war and spends about 5% of its GDP on defence. Regarding Ukraine's membership in the EU, the ambassador believes that the doors to the EU are open: "Ukraine meets all criteria and theoretically can apply for membership. However, I think it is a mistake to focus only on this." According to him, the Association Agreement is a blueprint for the modernization of the country, regardless of the possibility of joining the EU. In reality, the EU cannot offer membership to anyone partner country now. But if in 5-10 years Ukraine complies with most of the provisions of the Agreement, it will become part of a single European market, which will have a huge positive impact on the population. Last week, the EU published a report on the implementation of the Association Agreement and is currently discussing this document with the Ukrainian side. Among the nearest plans: this week's meeting at the EU-Ukraine Trade Union Committee. In the middle of December 2018, a political-level meeting (so-called Association Council) will be held in Brussels, where the Ukrainian side will discuss the proposal to deepen cooperation in four areas: energy, customs, digital economy, as well as freedom, justice and justice.

“Four years after the signing of the Association Agreement, Ukraine is a completely different country” – believes Veronika Movchan, the IER's academic director. She identified the three most important political areas for Ukraine, which have made tangible progress: decentralization, law enforcement and anti-corruption. To complete decentralization, constitutional changes are needed, the judicial system lacks confidence, the reputation of judges is questionable, and the new anti-corruption court must finally start working.

In the economic affairs, Veronika Movchan noted changes in monetary policy, the banking system, fiscal and energy policies. However, there is still a need of tax administration reform, Naftogaz unbundling, the transition to the market pricing and monetization of subsidies for the population.

Ukraine also made progress in implementing the DCFTA with the EU. Ukraine imposed the HACCP system and the "Single window" at the customs. It gradually decreased the customs duties and made tangible progress in harmonizing sectoral technical regulations. A major problem is the moratorium on unprocessed timber, which violates Ukraine's obligations under the Agreement.

Trade between Ukraine and the EU has been growing all four years. For the first time since the beginning of the observation, the EU share exceeded 40% of Ukraine's total commodity exports. At the same time, almost half of the exports are processed products. Thus, the EU has become the most important trade partner of Ukraine.

CEPS Senior Research Fellow Michael Emerson, while presenting the book "The Struggle for Good Governance in Eastern Europe" recalled the Revolution of Dignity with its ideology of good governance aspiration in Ukraine. The Association Agreement contains the bulk of the reforms that will change governance in Ukraine. "Thus, we see in Ukraine a program of change, which is backed up ideologically," said  Mr. Emerson. The book describes the semi-democracies, such as Ukraine, Georgia and Moldova. It argues that the countries should complete the unfinished judicial and anti-corruption reforms and need to transform its oligarchs into wealthy businessmen.

Michael Emerson also spoke on the issue of Brexit. In his opinion, this issue is also important for Ukrainians. "At a time when Britain leaves Europe, Ukraine struggles to get in there. “Who then is right and wrong, Ukraine or the UK?" - asks Michael Emerson himself. “Brexit is a great populist nonsense, – he concludes – as 80% of industrial enterprises in Britain cancelled or postponed their investment plans and banks transfer their assets to Frankfurt, Paris and Dublin. If Brexit still succeeds, Britain views the Ukrainian model of the Association Agreement as the model for its relations with the EU. Earlier, on this occasion, Michael Emerson was invited to address the House of Commons, where he gave a speech on the DCFTA between Ukraine and the EU.

The main ideas of the speakers:

Olga Stefanyshyna, Director of the Government Office for Coordination of European and Euro-Atlantic Integration: Ukraine has been implementing the Association Agreement unilaterally for three years and is now ready for its implementation bilaterally. Some delays in the implementation of certain changes take place not from Ukraine, but from the EU side. Therefore, we really need an active and effective two-way cooperation. The question of Ukraine’s sectoral membership in the EU is a matter of political consensus.

Iryna Bekeshkina, Director of the Democratic Initiatives Foundation: Ukrainians have always been in favour of joining the EU. Also, Ukrainians have always been in favour of joining the Customs Union with Russia. When asked about priorities, the country was divided in two halves. Now the most negative attitude towards Ukraine's accession to the EU is in Donbass. 26% of Ukrainians don’t see any benefits in the EU membership. It is quite a high percentage. We need to develop cheap tourism for young people, at least to Poland, so that they could see Europe with their own eyes. Ukrainians are mostly disturbed by corruption. According to the poll, the EU should put pressure on Ukrainian authorities and stop giving it financial assistance because “it may be stolen”.

Taras Tkachuk, analyst at DiXi Group: there are very many progressive steps in the energy sector. Level of the implementation in the sector: gas, environment and renewable energy - 33 points; electricity and nuclear safety – 28; oil sector – 26; implementation of the business climate - 56 points (due to the adoption of the law on EITI, which will allow to notice "sleeping" licenses); energy efficiency - 19 points.

Kostyantyn Yeliseyev, Deputy Head of the Presidential Administration: regarding so-called 4 unions, we want to simplify access to the EU gas market and to integrate into the EU electricity market. It is important for us now to show how profitable it is for the European side. We have handed the Roadmap for integration into the digital market over to the EU. We also discuss a roadmap for integration with the EU customs union. There is also talks on closer judicial cooperation. Regarding the cooperation in the field of security and defence, we presented 7 cooperation projects within PESCO.

Taras Kachka, Advisor to the Ministry of Foreign Affairs of Ukraine, and Adviser on Strategic Issues of the International Renaissance Foundation: We have two challenges in the Association Agreement: Ukraine's slow speed and intensity in implementation, in particular, in customs matters. The other one is the fact every proposal to the EU, is met with the argument that there are obstacles (especially in the energy sector). Yes, we cannot complete the energy reform without integrating into the EU energy market. We now have a situation in which we have to energetically reinforce our ambitions. The EU is able to develop under crisis conditions, and EU-Ukraine relations can develop further. Ukraine needs to take a chance that still exists in the next three months.

Leonid Litra, Senior Researcher at the New Europe Center: Recently, European leaders presented their vision of a European future. Unfortunately, Ukraine is not part of this vision. There is a great need of Association Agreement communication for both the EU and Ukraine. The EU should provide Ukraine's participation in its institutions following the example of Norway.

Andreas Umland, Institute for Euro-Atlantic Cooperation: The EU is not a state and therefore has many contradictions. The European Parliament is ready to give Ukraine, Moldova and Georgia the prospect of membership, yet the EU is not ready to do so. Ukraine can join a process of creation and participation in important institutions, although expectations should not be very high, as it did not significantly help Moldova. Ukraine should consider the possibility of granting a permanent residence permit to EU citizens. It will promote Ukraine’s demographic development.

To watch the video recording of the conference, please follow the links below:

1. Introduction and the welcoming words.