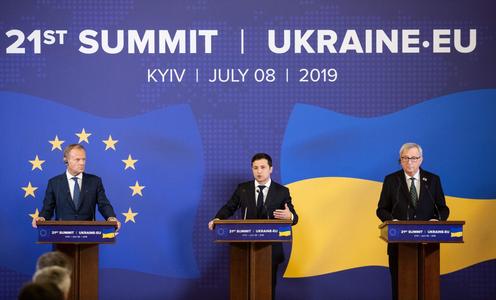 Results of the 21st Ukraine-EU Summit

President Volodymyr Zelenskyy offered to monitor the implementation of the Association Agreement between Ukraine and the European Union in order to bring the cooperation of our country and the EU to a new level.

"This Agreement should be a flexible instrument that would correspond to the current realities of our relations, and most importantly, to the potential of Ukraine. That is why I offered our partners to start a joint assessment of the implementation of the Agreement in order to reach a new level. The level that will meet the interests of Ukrainian and European business and our consumers," the Head of State noted during his communication with the media following the results of the 21st Ukraine-EU Summit.

Until such an assessment is carried out, the parties must make effective use of all available opportunities, as stated by Volodymyr Zelensky.

"We are committed to further sectoral integration of Ukraine and the EU in the priority areas: energy, digital market, justice and internal affairs, customs cooperation and trade facilitation", he stated.

The President noted that today, during the summit, the achievements of the last years had been discussed - the introduction of the visa-free regime, decentralization, transparent government procurement. However, in his opinion, the most important and complicated changes in Ukraine are ahead.

The Head of State assured the European partners that Ukraine was committed not only to anticorruption reform, but also to other changes.

"This is the de-shadowing of the economy, the creation of an independent court, the elimination of monopolies, the fight against raiding and smuggling - by the way, I will sign the relevant decrees tomorrow. We are also determined to complete decentralization and strengthen civil society," he added, noting that in the framework of the summit, six agreements had been signed on the financing of measures that promote the reforms mentioned.

"We want and we will move very quickly in the issues of positive changes", Volodymyr Zelenskyy said.

According to the President, the participants of the summit had also discussed prospects of trade relations and noted that trade between Ukraine and the European Union would continue to grow.

Separately, the Head of State thanked the European partners for their willingness to provide the second tranche of the fourth macro-financial assistance program to Ukraine in the amount of 500 million euros.

He also noted that relations between Ukraine and Europe were not just a partnership, political association or economic integration.

"These are friends with whom we have a frank, sometimes a truly emotional yet honest and friendly dialogue about our common future. Geographically, Ukraine is the center of Europe. I will do everything for Ukraine to become such a center economically and mentally", Volodymyr Zelenskyy stressed.

"We have a new President. Soon there will be a new parliament and a new government. Therefore, we will have a new chance," the Head of State emphasized.

For his part, President of the European Council Donald Tusk called today's summit a sign of improvement in the relations between Ukraine and the EU. "Our partnership is based on the Association Agreement, which is the largest comprehensive agreement ever made by the EU with any country. It is the basis of our political association and economic integration. Today, we discussed how to better use the potential of this Agreement for the sake of our citizens and businesses", he said.

Following the Ukraine-EU Summit, the parties signed the agreements on financial support for civil society, decentralization, anticorruption measures and reforms.

A series of agreements was signed following the Ukraine-EU Summit held in Kyiv on July 8.

In the presence of President of Ukraine Volodymyr Zelenskyy, President of the European Council Donald Tusk and President of the European Commission Jean-Claude Juncker, an agreement was signed on financing the "U-LEAD with Europe: Ukraine – Local Empowerment, Accountability and Development Programme - The Second Phase". The document envisages the attraction of the EU’s aid for the sum of EUR 40 million to finance decentralization reform and support for united communities.

An agreement was signed between the Government of Ukraine and the European Commission on the financing of the "Anticorruption Initiative - The Second Phase" with a total budget of EUR 22.9 million. The EU’s assistance is aimed at strengthening the fight against corruption at the national and local levels.

In addition, an agreement was signed between the Government of Ukraine and the European Commission to fund the "Support for Civil Society and Culture". The EU’s assistance totaling EUR 10 million would be mobilized to increase the capabilities of civil society organizations and cultural institutions in promoting the development of accountable, transparent and democratic institutions, social and economic development, as well as preventing violent conflicts.

In addition, an agreement was signed between the Government of Ukraine and the European Commission on the financing of the "Technical Cooperation Program 2019" aimed at supporting Ukraine in implementing key reforms and provisions of the Association Agreement between Ukraine and the EU in the area of free trade in agriculture, environment, energy, public procurement, business and investment climate, trade and labor relations. The total EU’s contribution under the document amounts to EUR 44 million.

Also, an additional agreement was signed between the Government of Ukraine and the European Commission on amending the agreement on financing the "EU Support for the East of Ukraine". The purpose of the document is to increase the amount of the EU’s funding by EUR 10 million to expand the activity under the agreement to the regions bordering the Sea of Azov, in particular, to the part of the Zaporizhzhia region. Thus, the amount of the EU’s assistance to finance all the measures under the agreement will equal EUR 60 million.