Ryanair Holdings Plc will extend its network further east than ever before with flights from Ukraine, targeting a market the low-cost giant says has huge pent-up demand while heightening competition with rival Wizz Air Holdings Plc.

Services will begin in October with four routes to the Ukrainian capital Kiev and seven to the western city of Lviv, Europe’s biggest discount airline said Wednesday, predicting that the flights will attract 510,000 passengers a year.

Ryanair has been expanding into eastern Europe and parts of the former Soviet Union as western markets become increasingly saturated. Chief Commercial Officer David O’Brien said Kiev has about three airline passengers a year per head of population compared with 15 in Dublin, where the company is based. 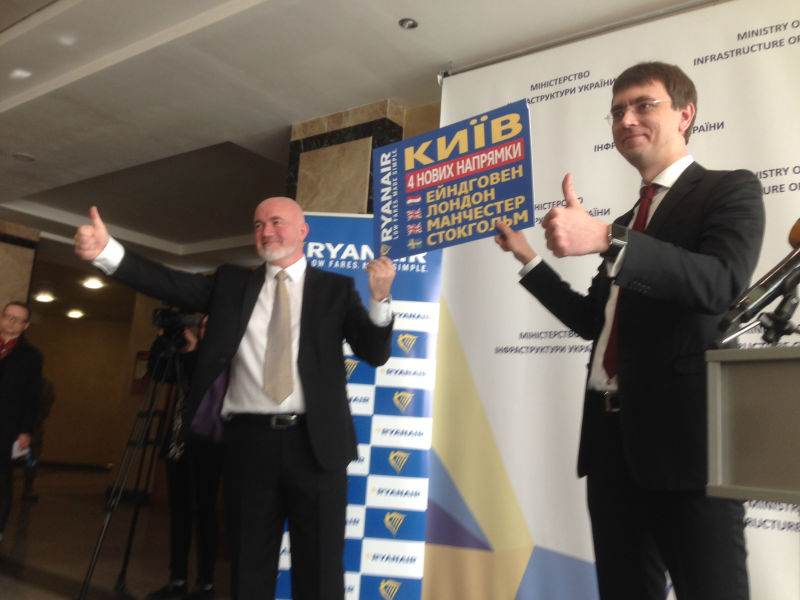 “There is a pretty large potential and fewer connections than there should be,” O’Brien said at a media briefing in Kiev. “Most Ukrainian traffic as far as I can see goes to Istanbul, Frankfurt or Warsaw.”

Kiev will get five flights a week from London Stansted, Ryanair’s biggest base, together with three each from Stockholm, Manchester in northern England and Eindhoven in the Netherlands. Lviv will have three weekly services from the Polish cities of Krakow and Wroclaw and two apiece from Stansted, Eindhoven, Berlin, Budapest and Memmingen, 80 kilometers (50 miles) east of Munich.

The push into new markets is increasing Ryanair’s overlap with the network of Wizz, eastern Europe’s largest discount operator, though the Budapest-based company closed a separate Ukrainian unit and canceled many flights there amid a 2015 recession linked to military conflict in the east of the country.

Wizz currently serves about 20 destinations from Kiev, including London, seven German cities and six in Poland, plus two from Lviv, according to its website.

Ukraine is also close to obtaining visa-free travel to the European Union for its citizens, with the matter to be discussed by the European Parliament on April 5. That could lead to the adoption of the new setup by June.