It is my great honor to be here today, at the Munich Security Conference. A platform, at which we all think about the many challenges to global security. Thank you for interesting and inspiring discussion. We analyze the origins and consequences of the challenges we face, and search for a possible response. We try fighting the present challenges in a fragmentary way, in a separate manner. Still, it is important to look globally, in a comprehensive way. In most cases, all of the present challenges have a common denominator, common origins and, even, common authors. Only the naïve could believe that wars and conflicts happen out of nowhere. As if they were inevitable. One hundred years ago, the First World War had been grown ripe long before it started. Many signs pointed to preparations for that war. However, most underestimated the challenges. Exactly a century later, in 2014, critical challenges to international security are back again. They were around for a long time already and grew in strength and destructive potential. And yet again, as was the case a hundred years ago, many overlooked these challenges. As well as the signs that should have awakened our instincts for self-preservation at least ten years ago. Today, there is nothing for us but to acknowledge that the hybrid war being waged by Russia is gradually turning into a full-fledged World Hybrid War. This war is being waged at different levels, on different battlefields and at different speeds. This war has already recruited many different actors, who might not be even aware of their destructive roles. However, the evil behind this war is the same, and he resides in Kremlin. Let us acknowledge that we failed to take it seriously, when in 2007 in Munich the Russian president declared his war on the civilized world. The Russian aggression against Ukraine in 2014 has become the most serious and cynical assault against democratic values and the international rules-based order. It had been plotted well in advance. And when the plot was activated, it involved many agents. Take marginal ultra-right and ultra-left parties, which have been supported by Russia for years around the world. Take armies of trolls and propagandists penetrating our homes, who recognize no borders, no moral principles and no rules. Take fake news, which distorts reality and disorients our societies. Take the migration waves, above all to the countries of the European Union, which were designed to destabilize and blow up it from within. Take cyber-attacks, which aim not only at election campaigns, but also at our critical infrastructure. As it was the case with the well-known “NotPetya” cyber-attack against Ukraine last year, which was part of Kremlin’s effort to destabilize our country and spread worldwide. I would like to thank the USA, Australia, to all international community for confirming it, and pointing at Russia’s responsibility for this cyber-attack. But even worse is the fact that these activities are accompanied by massive militarization of the Russian regime and its proven readiness to use any military tools available, including nuclear weapons. 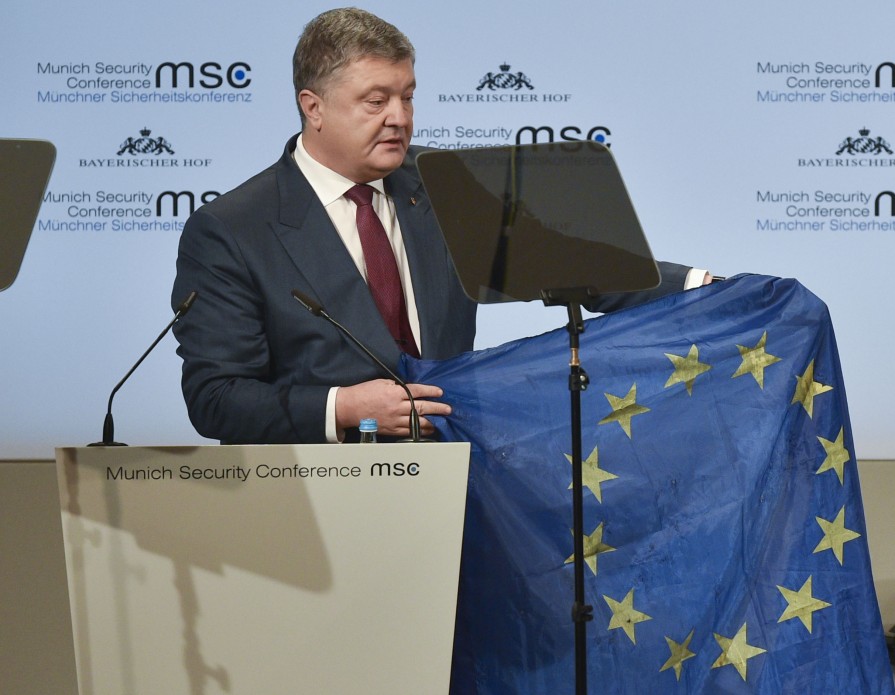 My dear friends, countering Russian aggression is an existential challenge in terms of what our future will be. Will it be a “Russian world of alternative values” or “the Free World of universal values?” To those who argue that we need to understand Russia’s interests, my answer is simple. First, you need to understand what the “Russian world” is. Examples are many. Just compare the standard of living in former Koenigsberg with the lifestyle in Munich. Or Karelian territories, annexed by Russia 80 years ago, with Finnish Karelia. Or the Kuril islands seized by Moscow after the Second World War with Japan. There is a shocking difference between the “Russian world” and the Free World. Mythological King Midas was able to turn everything he touched into gold. The “Russian world” turns everything it touches into ruin and decline. Have a look at Abkhazia, South Ossetia, Transnistria or occupied Donbas and Crimea. It seems that according to the “Russian world” doctrine, all the Europe should look like Kaliningrad or Donetsk under occupation, but not vice versa. It is absolutely unacceptable. Russia has not come to Crimea to protect the rights and freedoms of the people – they are violated everywhere Russia is present, and most brutally against the Crimean Tatars. Nor is Russia interested in incorporation of Donbas – this area has come under military assault of Kremlin to weaken and destabilize Ukraine. Yet, it is not Ukraine that is Moscow’s target. Russia has a different goal in mind. Its goal is to satisfy the Kremlin’s ambitions and to avenge the “greatest geopolitical catastrophe of the 20th century,” as Putin described the collapse of the Soviet Union. The collapse of the Russian world built on lies and violence. Well-known Soviet dissident, Aleksandr Solzhenitsyn once said that “violence can only be concealed by a lie, and a lie can only be maintained by violence.” Just recall the “little green men” in Crimea: after initial ridiculous denials, the Kremlin later confessed the truth. No surprise that the very same men have been traced this time in Syria for instance, obviously with their experience of previously fighting in Donbas and Crimea. I am not the one who believes the denials of Moscow that, as they claim, “they are not there.” I am the one to warn you that there are no limits in the Kremlin as regards its hidden agenda. There is no country, which is so familiar with Moscow’s hybrid tactics as Ukraine. That is why my message to you is that it is in our joint interest to resist Russia’s attempts to break our unity and ruin our democracies. To prove that blackmail and aggression are finished in Europe. That Europe is a continent of peace, stability and cooperation. And that universal values are to be respected by all.

Dear friends, these values are our greatest asset against the Russian threat. Unfortunately, we have had bitter experience when those values were sacrificed by some for their own benefits. But, in the end, with grave consequences for all. So, is the present case with Russia different? Our answer should be no. No to recognition of Russian presidential elections in occupied Crimea! No to resuming Russian credentials in the Parliamentary Assembly of the Council of Europe! No to conciliatory visits to Moscow seeking economic gain for your own benefit! No to Nord Stream 2, which is absolutely not about economic interests, but about Russian political and energy expansion! Neither politics, nor business can exist separately from values. Nor can sport. Today’s policy of Moscow is not about fair play. That is why Russia’s flag is not welcome at the 2018 Winter Olympics. I would say more: Russia’s flag shall not be welcome anywhere, while Russia keeps instigating the World Hybrid War and Russian bullets aim at our symbols. As it is the case with this flag of the European Union... which I brought with me to Munich from Avdiivka. I would like to demonstrate this flag from Avdiivka which is situated close to Donetsk, where a year ago the Russian aggression provoked the humanitarian catastrophe. My soldiers put this flag of the European Union as a symbol of the border of the European Union, because it is a border of the east of my country - eastern border of the European Union. Hope it will be there. This flag is about all those who withstand Russian aggression and believe in a United Europe – our family. Despite all the challenges, Donbas may well become a successful example of the peaceful settlement of a violent conflict. Actually, not much is needed – just genuine implementation by Russia of the Minsk arrangements – our comprehensive peace plan. There is a unique window of opportunity to help implement these arrangements, and it is about the deployment of the UN peacekeepers in Donbas – my initiative back in 2015 already! And now the whole world supports this initiative. There is a chance for Moscow to show a sense of compromise and agree on the UN peacekeepers throughout the occupied Donbas, including the uncontrolled part of Ukraine-Russia state border. We should agree in the UN Security Council to equip the UN peacekeepers in occupied Donbas with a robust functional mandate, based on longstanding UN principles, to allow them to fulfill their tasks and ensure a peaceful transition back Ukrainian sovereignty in accordance with Minsk. Russia wants to limit the UN peacekeepers to the contact line and entrust them with escort functions only. Should Russia stick with this position, it would mean that the Kremlin has no genuine interest in peace, but is trying to freeze the conflict under remote control. It would also mean that we should stay tough on Russia.

Dear colleagues, many sceptics ask: is it possible to win a fight against Russia – a nuclear state and a permanent member of the UN Security Council? Aren’t our efforts senseless and useless? My answer is as follows. To paraphrase the famous British statesman Benjamin Disraeli: we shall not defeat Russia, we shall transcend it. What does it mean? First, be firm on values. The only message to Moscow today has to be that the costs of its aggression will keep increasing until Russian troops leave Donbas and Crimea. We, politicians, have to stand firmly on this, despite the pressure of lobbyists. It is the responsibility of politicians to balance the economic rationale with moral considerations. And, when necessary, with bold restrictive measures – to bring to justice those who crossed the line. One’s more - sanctions are working! If somebody still thinks that the sanctions are ineffective, than we should strengthen them further, both by adding new sanctions and closing loopholes! Second, put illusions aside. The appeasement of the aggressor only breeds further aggression. Compromised values and principles quickly transform into even more aggression. How strange, though, it might sound for some, but today Ukraine is a key battlefield for the European order and security architecture. In this context, Ukraine is a shield and a sword of Europe. Please, do not miss a chance to build more just order in Europe by supporting us. By defending Ukraine, you defend the sovereignty, territorial integrity and independence of your countries.

Third, defend the truth. Internally and internationally. By means of improved national legislative frameworks and greater coordination between us to restrain Russian propaganda and fake news.

Fourth, strengthen Ukraine’s resilience. Through internal reforms and external support. Remember that there is no other country in the world that has been delivering on both tracks simultaneously – countering aggression and implementing reforms. We will keep up the momentum of reforms this year, including my demand for establishment of a special anti-corruption court. Ukraine’s progress so far would not be possible without assistance of our partners. But, we could multiply our reform achievements, including by means of such initiatives as the European plan for Ukraine.

Fifth, strengthen Ukraine’s defense capabilities. We are directing 6 % of our GDP to defence and security sectors. We are not claiming the territory of our neighbor, but we are protecting our soil. Ukraine’s enhanced defense potential would raise the costs of Russian aggression. In the face of such a strong deterrent, Moscow will think twice before launching any new offensives. And last but not least, keep your doors open for Ukraine – be it the EU or NATO. In the end, the greatest security gains come from enlargement and transformation, not from stepping back and maintaining the status quo. That would reverse the alternative agenda of the Kremlin built on lies, violence and disrespect for human rights, rule of law and democracy. That would defuse the World Hybrid War and deprive Russia of the tools it uses to destabilize our homelands.