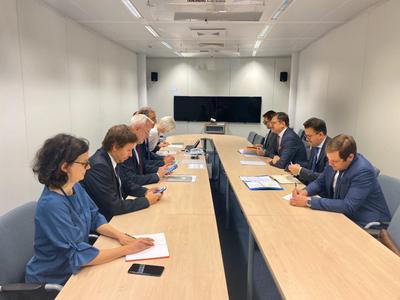 Ukraine and the EU intensify cooperation in countering disinformation

Ukraine and the EU have agreed to resume the work of the Ukraine-EU High Level Group on Strategic Communications chaired by the Deputy Prime Minister of Ukraine for European and Euro-Atlantic Integration.

During the meeting, the parties discussed formats to involve Ukraine in the activities of the DG Communication Task Force on disinformation, as well as deepening cooperation with the EU East StratCom Task Force.

"In the near future, we will prepare and hold a high-level meeting of EU and Ukrainian representatives to tackle the issues of countering disinformation and increasing resistance to information impact," said the Deputy Prime Minister.

Ukraine is interested in establishing a permanent mechanism for sharing information and best practices between Ukrainian and European experts to counter disinformation, to provide strategic communications and cybersecurity. The goal is to strengthen the capability of Ukrainian institutions to withstand hybrid attacks on Russia.

In this regard, the Deputy Prime Minister proposed to build permanent cooperation between EU East StratCom and the Ministry of Foreign Affairs of Ukraine in such areas as crisis communications; proactive strategic communications; delivering information based on facts; development and implementation of joint information campaigns; exchange of monitoring results.

The participants also discussed ways of communicating European integration in Ukraine, in particular, the benefits from the Association Agreement, with a focus on eastern and southern regions. The Deputy Prime Minister stressed the importance of large-scale information work in the context of reintegration of the temporarily occupied territories. According to him, Ukraine is counting on the continuation and expansion by the EU of its targeted information campaigns in Ukraine.

Dmytro Kuleba also noted that Ukraine is interested in joining the EU Rapid Alert System (RAS), which is being created to respond promptly to disinformation campaigns.

“We seek to act together with the EU to strengthen the resilience of both the EU and Ukraine in response to all kinds of threats and in providing better protection of our information and communication networks. We call for intensification of our cooperation on cybersecurity and building a regular bilateral dialogue in this field,” Dmytro Kuleba summed up.

Source and Photo credit: the Government of Ukraine