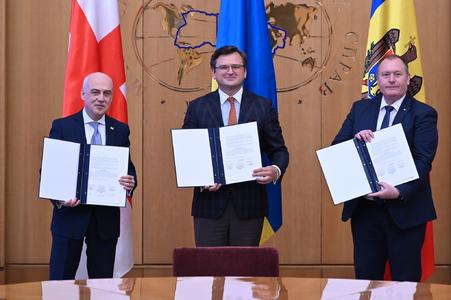 The signing ceremony of the memorandum took place during a joint visit of the foreign ministers of Moldova and Georgia to Kyiv.

"We have done a very important thing today. We signed a document to establish the Associated Trio. This will be enhanced cooperation between our three countries on the issues of European integration. This is a new initiative, it is very timely, and this decision is very timely, which will help our countries to move forward more efficiently together on the path of European integration," Kuleba said after the signing ceremony.

As noted, Ukraine, Georgia and Moldova have a special status of associate partners in relations with the EU and have made their choice in favor of future EU membership.

"Today we have agreed to formalize this status and together continue to move towards European integration. The Associated Trio includes three main elements: structured consultations on European integration between the three ministries of foreign affairs, joint engagement in dialogue with European institutions, as well as coordination of positions within the Eastern Partnership," Kuleba explained.

Minister of Foreign Affairs of Georgia David Zalkaliani said that based on the memorandum, the foreign ministries of the three countries would determine concrete steps and work together to strengthen political dialogue with the EU, as well as economic and sectoral integration with the European Union.

Acting Prime Minister, Minister of Foreign Affairs and European Integration of the Republic of Moldova Aureliu Ciocoi noted that signing of the memorandum was a logical continuation of the cooperation started earlier.

"Of course, each of the three countries has its own specific interests and specific issues on the agenda of cooperation with the EU. We will discuss them bilaterally, but we will also cooperate on issues in which we see the added value of our tripartite efforts," Ciocoi said.