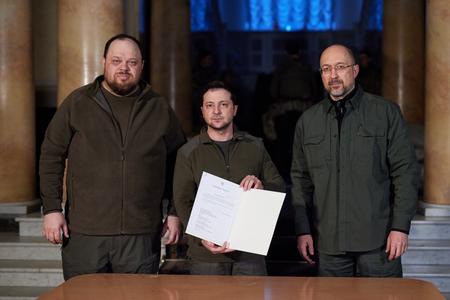 President Volodymyr Zelenskyy signed an application for Ukraine's membership in the European Union.

Also, together with Chairman of the Verkhovna Rada Ruslan Stefanchuk and Prime Minister Denys Shmyhal, a Joint Statement was signed.

The documents stipulate that Ukraine respects the values enshrined in Article 2 of the Treaty on European Union, and is honored to apply for membership in accordance with Article 49 of this Treaty.

"Ukraine, paying such a huge price for the European choice and security of Europe, will be able to go through this path," the documents read.

The success of European integration of Ukraine will be a significant contribution to the stability and safety of the European continent.

Ukraine will ask to consider an application according to a special procedure, that is to immediately begin a formal process, which will grant our state a status of candidate for membership.

On March 1, 2022,  Head of Ukraine’s Mission to the EU Vsevolod Chentsov handed over Ukraine’s application for the EU membership signed by President Volodymyr Zelenskyy to French Permanent Representative to the EU Philippe Léglise-Costa, current Presidency of the Council of the EU.

Source: Office of the President of Ukraine