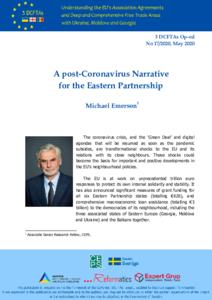 A post-Coronavirus Narrative for the Eastern Partnership

The coronavirus crisis, and the ‘Green Deal’ and digital agendas that will be resumed as soon as the pandemic subsides, are transformational shocks to the EU and its relations with its close neighbours. These shocks could become the basis for important and positive developments in the EU’s neighbourhood policies.

The EU is at work on unprecedented trillion euro responses to protect its own internal solidarity and stability. It has also announced significant measures of grant funding for all six Eastern Partnership states (totalling €626), and comprehensive macroeconomic loan assistance (totalling €3 billion) to the democracies of its neighbourhood, including the three associated states of Eastern Europe (Georgia, Moldova and Ukraine) and the Balkans together.

Linking to this latter point, the EU-Balkan summit on 6 May saw reference only to the region’s ‘European perspectives’, implicitly downplaying membership perspectives. While the two groups are indeed increasingly treated in a comparable manner, it is consistent with the fact that they are broadly at a similar level in terms of EU political and economic norms.

Looking a little ahead, the EU and its Eastern Partners are due to hold their summit on 18 June (doubtless also of the virtual Zoom variety), and all parties must be thinking how to factor the new realities into orientations for the future.

Deepening European values. The starting point from the EU side is surely that its own set of fundamental values is now deepened beyond the familiar triptych of democracy, human rights and rule of law. Now also with top rankings are human health, the health of the planet, and solidarity in meeting these new or imminent existential challenges.

Preparation of a revised set of the EU’s fundamental values is an eminently suitable task for the ‘Future of Europe’ conference, which may begin very soon. Such conferences can typically prepare the way for the negotiation of treaty changes, but the whole process takes years.

However the Eastern Partnership summit does not have to wait for that. These new values will surely be written into its concluding declaration at least in broad qualitative terms.

The questions that follow are about the extent of the commitments of the partner states to this de facto enlarged set of values, and the operational conclusions that can ensue.

The commitment to human health will be shared by all for sure, and quite appropriately the EU agreed to extend humanitarian assistance to all six Eastern Partners.

However commitment to the entire enlarged set of European values, including democracy, is another matter, and this will only be meaningfully possible for the three associated states and maybe Armenia too. As regards the requirements for adequate climate policies and planetary health, the practical test is which countries are able and willing to associate with the planned Green Deal. This depends on willingness to align their energy and environmental policies and laws on the fast evolving EU practice. This also means the three associated states, given their Deep and Comprehensive Free Trade Areas (DCFTAs) with the EU, and again possibly Armenia, whose Comprehensive and Enhance Partnership Agreement (CEPA) also includes some commitments to approximate EU energy and environmental laws.

Let us suppose that at least the associated states are willing to assert full commitment to this enlarged set of European values and consequent policy objectives. This would go perfectly alongside the existing wish of these states to make a politically significant step up on top of their existing Association Agreements. All three states made extensive practical proposals along these lines at the end of last year in response to the Commission’s ‘structured consultation’, which we have summarised elsewhere.

This leads on to the issue of solidarity, framed on the EU side with invocation of the ‘more for more’ principle. While initial grant and loan assistance commitments by the EU have been made already in response to the coronavirus crisis, the ultimate challenges stretch further into the future on a huge scale, first to manage the economic and societal recovery from the devastating recession, secondly to scale up climate, environmental and energy policy commitments, and thirdly to combine both in a new model of sustainable economic growth.

Many components of this scenario are very expensive, such as achieving high energy efficiency in mass housing and eliminating coal-burning power generation (as big a problem for Ukraine as for Poland), while investments in renewables also need to be scaled up. By comparison with the colossal scale of the plans being made by the EU to rescue its own economy, the sums required can be marginal, while big for the associated states. Yet enhanced solidarity would require one further crucial commitment, which is drastically to cut corruption. This has been met to a high degree in Georgia, but not yet in Moldova and Ukraine, where many good intentions have been expressed, while the decisive political commitment and action has not yet happened. This would have to be programmed credibly as condition for enhanced solidarity.

Orientations along these lines fit perfectly into the EU’s broader foreign policy objectives. European values, as are now being enriched, are the EU’s unique strength. None of the so-called great powers, nor any other continental region can project this set as a whole - given also that for Europe peace not just as a slogan, but as a profound value that has dissolved historic enemities. Translating these values now into realities in the associated states means Europeanisation in action, aside from the stalled issue of membership perspectives, and would give food for thought to the peoples of other European states, and most of all Russia.