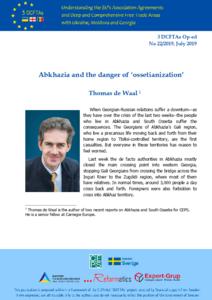 Abkhazia and the danger of "ossetianization"

When Georgian-Russian relations suffer a downturn — as they have over the crisis of the last two weeks - the people who live in Abkhazia and South Ossetia suffer the consequences. The Georgians of Abkhazia’s Gali region, who live a precarious life moving back and forth from their home region to Tbilisi-controlled territory, are the first casualties. But everyone in these territories has reason to feel worried.

Last week the de facto authorities in Abkhazia mostly closed the main crossing point into western Georgia, stopping Gali Georgians from crossing the bridge across the Inguri River to the Zugdidi region, where most of them have relatives. In normal times, around 3,000 people a day cross back and forth. Foreigners were also forbidden to cross into Abkhaz territory.

The pretext — alleged security concerns due to the recent opposition protests in Georgian cities — makes no sense. The de facto border is heavily guarded by both Russian and Abkhaz military personnel. This was a political move, a gesture of support for Moscow in its row with Tbilisi.

It’s one more worrying symptom of a process that some call “Ossetianization”, a process whereby Abkhazia, which still maintains some links to the outside world, is beginning to close itself off like South Ossetia.

Abkhazia and South Ossetia often get put in the same basket. Both territories are home to indigenous minorities and had autonomous status inside Soviet Georgia and close ties to Russia. Both fought conflicts with Tbilisi in the 1990s as the Soviet Union broke up, partially broke away and were then recognized as independent states by Moscow, following the Five-Day War of August 2008.

Over the last decade, the two have grown apart, however. South Ossetia has fallen into full isolation, while many in Abkhazia, always more complex, still aspire to be part of the wider world - if they can.

South Ossetia has been hollowed out since 2008. Civil society and free journalism have all but disappeared. Using birth and school enrollment figures, I estimate the population to be just 39,000. (In the last Soviet census of 1989 was 98,000). Locals have moved out in search of better life and employment prospects, mainly to the North Ossetian city of Vladikavkaz on the Russian side of the mountains. Officially, just 4,000 Georgians remain. They are heavily outnumbered by Russian troops, border-guards and FSB agents.

Russian fences and border posts keep people apart. A new Amnesty International report names 29 Georgian villages on the administrative border with South Ossetia, where ordinary people have lost access to land or cemeteries due to new border installations. When villagers cross the line, they risk being arbitrarily detained. This is a great and avoidable tragedy, as for centuries Georgians and Ossetians have lived together and there are still many mixed marriages.

Present-day South Ossetia holds almost no value for Moscow, except as a military base close to the heart of Georgia. The Kremlin has rebuffed overtures from Tskhinvali to hold a referendum on joining the Russian Federation. The Ossetians want union more than the Russians do. Here we see the strategic bind Moscow has gotten itself into: the more it exerts control over these small territories, the more it loses a much more important asset-influence over Georgia as a whole.

Abkhazia is larger and more diverse, with a population probably of a quarter of a million people — although that is also half what it had in 1989, when it had a large Georgian population. It is both more important to Russia and less compliant. Despite being dependent on Russia for security and around two thirds of its budget the Abkhaz elite still harbors a stubborn — some would say quixotic — project of being independent of both Georgia and Russia.

Relations with Moscow can be strained. Some in Abkhazia allege foul play from Moscow was behind the poisoning of opposition candidate Aslan Bzhania in April ahead of the forthcoming presidential election. (The election has now been postponed, until August 25, in the hope that Bzhania can take part).

In 2014 the Abkhaz rejected the first draft of an “integration treaty” with Moscow and have so far avoided legalizing property sales to Russian citizens — something which would surely result in all of its prime Black Sea real estate being snapped up. The Crimea effec t — Russia’s take-over of a larger, important and more loyal Black Sea territory — is also felt. In the last four years, Russian aid to Abkhazia has fallen. One Abkhaz parliamentarian called the austere 2019 budget one “not of development but of stagnation”. Russian tourist numbers have dropped.

The risk for Abkhazia may not be so much outright annexation by Moscow as neglect and decline. Abkhaz do not want to be swallowed up by Russia. Tbilisi has adopted much more progressive policies towards Abkhazia in the last six years, in at least tacit acknowledgement of the many mistakes it has made before. But there is a long way to go. Most Georgians fail to appreciate how strong the memory remains of the 1992-3 war, when the ethnic Abkhaz, lost as much as five percent of their population. Modern Georgia may look less threatening than before, but Russia is still preferred as the lesser of two evils.

Some space for international contacts remains open in Abkhazia, a fading legacy of its cosmopolitan character in Soviet times. It still has a non-governmental sector, independent journalists, a beleaguered but outward-looking professional class. These people would welcome some international (but not Georgian) assistance to tackle its many problems - environmental degradation, poor education and healthcare. But this civic space is under threat, as the recent closure of the bridge shows. This is where the immediate struggle for Abkhazia’s future lies. The example of South Ossetia looms as a warning on the horizon.