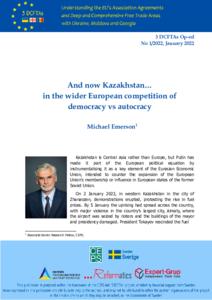 And now Kazakhstan... in the wider European competition of democracy vs autocracy

Kazakhstan is Central Asia rather than Europe, but Putin has made it part of the European political equation by instrumentalising it as a key element of the Eurasian Economic Union, intended to counter the expansion of European Union’s membership or influence in European states of the former Soviet Union.

On 2 January 2022, in western Kazakhstan in the city of Zhanaozen, demonstrations erupted, protesting the rise in fuel prices. By 5 January the uprising had spread across the country, with major violence in the country’s largest city, Almaty, where the airport was seized by rioters and the buildings of the mayor and presidency damaged. President Tokayev rescinded the fuel price rises, and declared a national emergency, informing security personal to shoot to kill without warning. By 9 January the interior ministry stated that 6,000 protestors has been arrested, 194 killed, with 18 security personnel also killed. President Tokayev stated the protests were the work of terrorist foreign agents, for which there is no evidence at all according to Western journalists on the spot, while Russian state television has characteristically broadcast disinformation on this, implying that thousands of jihadis were driving the process.

The timing could not have been worse for Putin, since it comes coincidentally as he mounts pressure on the West to shape the European security order to his taste, while his two direct neighbors and allies on his western and eastern flanks both show themselves to be disordered and failing political regimes.  While Putin’s big security gambit remains to be played out, the political map and dynamics of the wider Europe become clearer. While Putin claims to be surrounded by NATO threats, the first ring of threats to his authoritarian regime comes from the Eurasian Economic Union states themselves.

Much more serious was the uprising in 2020 in Belarus, which came close to a democratic colour revolution to unseat Lukashenko. The sequel has underlined a first principle of the dynamics of authoritarian regimes: to be sustained they have to become increasingly repressive, until at some point they implode.

Kazakhstan fits into this model. For most of the time under Nazabayev it was a quiet authoritarian state. The regime has now become increasingly repressive and reliant on external support to survive. Tokayev was so desperate that he requested and immediately received military support from the Collective Security Treaty Organization (CSTO), triggered by invocation of its clause equivalent to NATO’s article V. Troops have been sent in by Russia, Armenia, Belarus, Kyrgyzstan and Tajikistan. These security guarantees are meant to be about external threats.

The model is further at play in Russia itself, as illustrated on 28 December 2021 by the Supreme Court’s closure of Memorial on the bogus grounds that it had refused to register as a ‘foreign agent’, following the attempted assassination of Navalny in 2020 and his imprisonment in 2021.

On a further detail, Kyrgyzstan has a long track record as Central Asia’s least undemocratic state, with President Jeenbekov elected in 2019 with a mandate to parliamentary democracy.

As to Europe’s other authoritarian leaders, Erdogan’s regime in Turkey seems to be moving towards its end, partly due to his exotically incompetent monetary policy, already causing collapse of the currency. Meanwhile, Aliev in Azerbaijan seems to be living off the bonus of a successful war with Armenia, relying on one of the last resorts of the autocrat – a patriotic military victory.

By comparison, the ongoing debates about democracy’s failings or imperfections in the rest of Europe find their fundamental perspectives. Democratic processes in core Western Europe appear to be quite robust, with populist challenges losing ground, for example in Italy. In the UK Johnson is a populist leader who has become unpopular. His time will be up soon. But his Brexit, while terribly damaging for the UK itself, has at least enabled the EU to advance impressively through its COVID recovery programme without being hobbled by a London veto over its funding.

The most seriously defective European democracies in Central and Eastern Europe are struggling rather than collapsing. In both Hungary and Poland serious political opposition parties exist and will challenge the incumbents in forthcoming elections. Bulgaria has just voted in more correctly democratic leadership.

Last but not least come the Trio states of Eastern Europe –  Ukraine, Moldova and Georgia – who are democratic Europe’s frontline against the repressive and aggressive Russia. Zelensky’s leadership in Ukraine is weak and flawed, but the country is still an open democracy with a vibrant civil society. Moldova became in 2020-21 a model of how a deeply defective democracy can still have the capacity and flexibility to engineer democratic renewal and serious political reform. A model also for Georgia’s currently increasingly undemocratic regime to emulate in due course.

The overall conclusion, reduced to basics, seems to be that Europe’s autocracies are failing regimes, while Europe’s democracies are either robust or plausible candidates for improvement. While Putin threatens Europe with hypersonic missiles, his position in the underlying balance of competing political ideologies is weak, at least in the European continent. Maybe the Russian people will sometime conclude that their state should offer them other public goods than an outsized military.