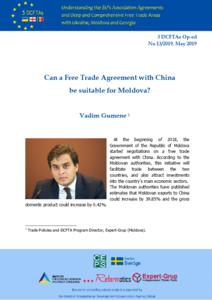 Can a Free Trade Agreement with China be suitable for Moldova?

At the beginning of 2018, the Government of the Republic of Moldova started negotiations on a free trade agreement with China. According to the Moldovan authorities, this initiative will facilitate trade between the two countries, and also attract investments into the country’s main economic sectors.

This initiative is taking place in a context where, in 2018, Moldova’s trade deficit with China is massive. Imports from China were 32 times higher than the exports to this destination (USD 600 million vs. USD 19 million respectively), and the trade balance with this country has been worsening continuously over the last few years. While imports were diversified among non-agricultural products, exports were excessively concentrated, with only one product being exported - grape wine. Of course, such a large difference in trade flows does not necessarily indicate the futility of a preferential arrangement, as long as the given initiative is supported by a serious economic logic. Although, the optimistic scenarios were presented by the authorities, these were not supported by analyses (at least made public) demonstrating the economic justification for this agreement and any objective quantification of its impact on the national economy.

Evolution of Moldova-China trade flows, USD million (see chart in a pdf version of op-ed below).

The prospects for expanding Moldovan exports to this market are rather vague, with the potential being almost entirely concentrated on agricultural products with rather low value added. At the same time, even this potential could be eroded as there is a risk that certain products (e.g. cereals, sugar) would not benefit from preferential treatment, as seen in other free trade agreements concluded by China with its partners. Customs duties for these products are extremely high, from 50 to 65%, even in China’s free trade agreements with other countries. Meanwhile, the grape wine ranks the first among the Moldovan products with the greatest export potential on the Chinese market. However, the analysis of all wine suppliers on the Chinese market (implicitly Moldova’s competitors) reveals that this potential is significantly lower than of its competitors.

The tariff policy of Moldova is already very liberal with regards to the imports of non-agricultural products, these as mentioned are characteristic of imports from China. Intermediate goods that supposedly could be used as inputs by national industries accounted for about 39% of total imports from China in 2017, and the average applied tariff to these categories of imports is only 4.4%. Also, an even more liberal import treatment (with an average applied tariff of only 2.6%) is currently applied to capital goods, which accounted for 26.8% of total imports from China in 2017. Even if consumption goods could benefit the most from the liberalization of imports with China, it is not certain that liberalization will have a direct impact on the consumer.

On the other hand, investments had a rather anaemic evolution, with a stock of direct Chinese investments in Moldova of only USD 1.5 million in late 2017. This is so, in spite of the existing framework regulated both by the commitments taken in the World Trade Organization (WTO) and by the bilateral Agreement on reciprocal promotion and protection of investments, that have guaranteed a fairly liberal trade and investment policy. Moreover, there are doubts that signing a free trade agreement will boost Chinese investments, as its provisions will reflect largely existing WTO commitments (except for the tariff policy) and there would be no preferential rules of origin to favour export-oriented Chinese production (with the use of Chinese inputs), since China is not party to such schemes under free trade agreements currently in place (EU, CIS, CEFTA, Turkey).

Certainly, liberalization of trade between countries can generate a range of benefits in an economy: on the one hand it opens up the market for imported products and technologies, with positive implications for national industries and consumers, and on the other hand, it helps expand exports to a new market in more advantageous conditions. However, a more detailed analysis of all the objective and subjective factors that are characteristic of Moldovan-Chinese trade relations reveals less solid reasons for engaging in such a complex commitment as a free trade agreement. Certainly, strengthening the Moldovan-Chinese relations should be a priority of the country's trade policy, however the implementation of these complex arrangements needs to be gradual and based on solid economic arguments at each stage.

To achieve the goal of promoting and boosting Chinese investments in Moldova, it would be more appropriate to upgrade the existing Agreement on reciprocal promotion and protection of investments. Neither the relative, nor the absolute values of customs duties for intermediate and capital goods hinder the development of production facilities in the country. At the same time, the WTO membership of both countries provides that relations are based on international norms and commitments.