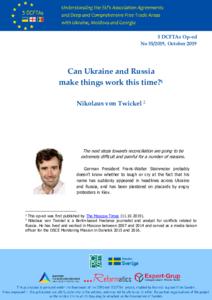 Can Ukraine and Russia make things work this time?

The next steps towards reconciliation are going to be extremely difficult and painful for a number of reasons.

German President Frank-Walter Steinmeier probably doesn’t know whether to laugh or cry at the fact that his name has suddenly appeared in headlines across Ukraine and Russia, and has been plastered on placards by angry protesters in Kiev.

The Steinmeier Formula, after all, was an attempt in 2016 to bridge an impasse in the difficult peace process in eastern Ukraine. Back then, Ukrainian President Petro Poroshenko did not want to grant political autonomy — so-called special status — to the effectively Russian-controlled separatist-held areas in eastern Donbass before local elections could be held there under Ukrainian law. Russia and her separatist clients supported the initiative, although the Minsk Agreement, signed by all sides, is vague on the timing.

Steinmeier, German Foreign Minister at the time, lent his name to the compromise, which stipulates that special status will be granted on a preliminary basis after polls close on election day. Permanent special status would then only be enshrined through a constitutional amendment if election observers from the Organization for Security and Cooperation in Europe (OSCE) declare that the vote met their standards for a free and fair ballot.

The Steinmeier Formula is a small trade-off in the much larger conundrum of the entire Minsk Agreement, which stipulates that the separatist-held areas should remain in Ukraine but be given wide-ranging autonomy, including the right to maintain “People’s Militias”.

So why are people in Kiev and elsewhere in Ukraine getting worked up about Steinmeier, and not about Minsk?

One reason is that the Formula itself has been an eternal issue of contention between Russia, Ukraine and the OSCE in their attempt to find a diplomatic solution to the conflict through the Minsk Contact Group. The group has managed to secure a number of under-noticed but important agreements to ease the plight of civilians in Donbass such as payments for water and electricity, and the repair of pipelines and cables. Despite that, the trilateral set-up has become widely associated with the overall stagnation, or ‘freezing’ of the conflict.

The fact Ukraine has now signed-up to the Steinmeier Formula suggests the administration of the young and inexperienced President Volodymyr Zelenskiy is seriously considering taking the long and winding road of the Minsk Agreement in order to deliver its key promise: peace in the Donbass.

This is where the headache starts and what has sent protestors onto the streets. The next steps are going to be extremely difficult and painful for a number of reasons.

First, Elections. The idea that the ‘People’s Republics’ will hold a vote according to OSCE standards that can be approved by observers from the organization’s Office of Democratic Institutions and Human Rights (ODIHR), is about as realistic as a democratic election in North Korea. Parliamentary and leadership elections in Donetsk and Luhansk last November were a farcical appraisal of Moscow’s chosen men, with all credible opposition candidates kept off the ballot paper through various dubious measures. Last but not least, to succeed, democratic elections need open, democratic societies and free media. The ‘People’s Republics’ are light years away from that.

Second, special status. While the Minsk Agreement does not mention the term ‘People’s Republics’, a footnote highlights that “certain areas” will be allowed to appoint their own judges, retain special ties with Russia and maintain “People’s Militias” to protect law and order. This is currently being interpreted by the separatists as a license to keep their pro-Russian military dictatorships in place.

Third, direct dialogue. The Minsk Agreement stipulates that the government in Kiev needs to start direct dialogue with the separatists about the elections and the Republics’ special status. The Poroshenko administration stubbornly refused to do this and it will be interesting to see what course Zelenskiy will take.

Fourth, border control. The porous border with Russia is being used to bring in military supplies and sustain the separatists. The more pressing issue, however, is the space between the border and the demarcation line separating the government and non-government controlled areas.

This area is slowly transforming into an iron curtain, similar to the one that divided east and west Germany during the Cold War. Ukraine does not just need control of the border with Russia, it needs control of the hundreds of cities, towns and villages which are home to up to three million people inside the region. It remains unclear how this will look after a settlement.

Too little, too late?

Overall, the fundamental critique of the Minsk Agreement remains the same. In order to end an act of foreign aggression, it forces Ukraine to accommodate potentially hostile pro-Russian entities into the country through a constitutional amendment.

None of this is new. The cards have been on the table since 2015.

Since then the separatist regimes in Donetsk and Luhansk, backed by Russian state media, have been doing their best to whip up hatred against Ukraine, while talking endlessly about integration and eventual union with Russia. For a peaceful reintegration with Ukraine, this needs to stop as soon as possible.

Meanwhile, supporting the ‘People’s Republics’ — with their aging population and crumbling industries — is hurting Russia. Without accounting for military expenditure, Russia is spending an estimated $2.2 billion per year on support for Donetsk and Luhansk — roughly 1% of Russia’s entire budget.

Many experts believe the recent impetus for a rapprochement which has emerged from the Kremlin is being pushed by the more pragmatic policymakers — those who understand the economics.

Putin’s recent criticism of Russian television’s hostile coverage of Ukraine and Russia’s “brotherly people” may signal a change in policy. Let’s hope that it is not too little, too late.