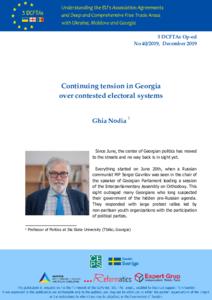 Since June, the center of Georgian politics has moved to the streets and no way back is in sight yet.

Everything started on June 20th, when a Russian communist MP Sergei Gavrilov was seen in the chair of the speaker of Georgian Parliament leading a session of the Interparliamentary Assembly on Orthodoxy. This sight outraged many Georgians who long suspected their government of the hidden pro-Russian agenda. They responded with large protest rallies led by non-partisan youth organizations with the participation of political parties.

The government was scared and made several concessions. The most important was a firm promise to change the electoral system from a mixed to a fully proportionate one fo the next parliamentary elections expected in the fall of 2020.