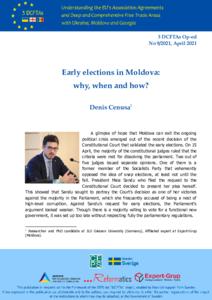 Early elections in Moldova: why, when and how?

A glimpse of hope that Moldova can exit the ongoing political crisis emerged out of the recent decision of the Constitutional Court that validated the early elections. On 15 April, the majority of the constitutional judges ruled that the criteria were met for dissolving the parliament. Two out of five judges issued separate opinions. One of them is a former member of the Socialists Party that vehemently opposed the idea of snap elections, at least not until the fall. President Maia Sandu who filed the request to the Constitutional Court decided to present her plea herself. This showed that Sandu sought to portray the Court’s decision as one of her victories against the majority in the Parliament, which she frequently accused of being a nest of high-level corruption. Against Sandu’s request for early elections, the Parliament’s argument looked weaker. Though there is a majority willing to vote for a functional new government, it was set up too late without respecting fully the parliamentary regulations.

Both President Sandu and her adversaries in the Socialists Party, primarily the ex-President Igor Dodon, anticipated the Court’s decision. The Court only follows the constitutional provisions and ideally makes no political assessments. Thus, the two failed attempts of appointing a new Prime Minister in January and March 2021, with 45 days in between the attempts, constituted the primary condition for activating the clause permitting early elections. This legal argument stood out among other reasons articulated by President Sandu in front of the constitutional judges.

At the same time, the Socialists’ position about President Sandu’s “fake” candidates for the Prime Minister office in the pursuit of early elections did not count in the deliberations of the Constitutional Court. Now President Sandu can issue a decree announcing the dissolution of the parliament.

According to the electoral legislation, the snap elections can take place in three months from the dissolution of the legislative body. However, the Socialists’ leader Igor Dodon has previously promised to challenge the Constitutional Court’s decision. Dodon suggested declaring that the political forces surrounding President Sandu “captured” the Court or were refusing to allocate the financial resources for organizing the elections (over €4.6 million).

The remaining obstacle for holding the early elections comprises the “state of emergency”, which was introduced for two months, lasting until the end of May 2021. This special regime makes it highly improbable to arrange the early elections, though the interim government has larger competencies, including in terms of redistribution of the budgetary resources. The Socialists objected to the idea of diverting the limited resources for organizing the elections and reiterated that all available money should be spent on vaccines.

If President Sandu succeeds to end the “state of emergency” by another appeal to the Constitutional Court, then the elections can take place in July. Otherwise, especially if the Socialists continue their opposition through the Parliament, the elections will be moved for the fall or even later. The stakes are high for the Socialists who intend to incriminate Sandu with the responsibility for putting the early elections in front of public health. They expect thus to reduce the popularity of Sandu’s party and rising star in Moldovan politics – the Party of Solidarity and Action. Seemingly, the Socialists’ interest lies in damaging Sandu’s party, reversing the popularity boost produced by the victory in the 2020 presidential elections. While Sandu insists on the early elections, Covid-19 infections reach 1,000 daily cases, which makes it easier is for the Socialists to castigate the immorality of holding early elections in the middle of the pandemic. In any case, the proponents of the early elections have to take into consideration the epidemiological conditions, because this will become the hot topic of the electoral campaign. If this aspect is overlooked, then the electoral prospects of the pro-reform forces might become slimmer than the surveys are currently indicating.