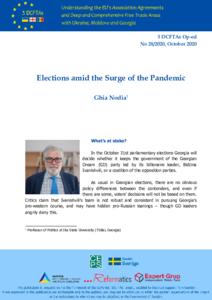 Elections amid the Surge of the Pandemic

In the October 31st parliamentary elections Georgia will decide whether it keeps the government of the Georgian Dream (GD) party led by its billionaire leader, Bidzina Ivanishvili, or a coalition of the opposition parties.

As usual in Georgian elections, there are no obvious policy differences between the contenders, and even if there are some, voters’ decisions will not be based on them. Critics claim that Ivanishvili’s team is not robust and consistent in pursuing Georgia’s pro-western course, and may have hidden pro-Russian leanings – through GD leaders angrily deny this.

The issue is more about democracy. GD, like other ruling parties before it, has monopolized all levers of power and established full control over the justice system, using this position to harass the opposition and the media. An opposition victory might take Georgia’s out of its vicious circle of replacing one dominant party created around an individual powerful leader with another. If GD fails to win, the alternative may only be a coalition government, and this will be for the first time in Georgia’s history.

The Chances of the Parties

In Georgia, pre-election polls are few, their results diverge broadly and their reliability is often questioned. However, one can still derive some overall picture from them – though a very uncertain one. GD has a clear plurality, followed by Unity is Strength (UiS), a coalition around the former president, Mikheil Saakashvili, and his party, United National Movement (UNM). Then come smaller opposition parties. Nobody can challenge GD on its own; however, if one compares GD support with all the opposition parties combined, it’s a close call, or the collective opposition scores somewhat better. Opposition parties occasionally attack each other but indicate that they are open to creating a coalition government. As always, there is a large number of undecided voters (at least 20 percent, but often much more), which makes any predictions very shaky indeed.

If asked, whether they prefer a new coalition government or the status quo, the majority opts for the former. But if the question is about their expectations, more people think GD will retain power.

The pre-election environment is influenced by a modified electoral system, which some people call "almost proportional": 120 out of 150 seats will be distributed among party lists, with a one percent threshold, and thirty will go to single-mandate constituencies. This change was adopted after a long fight, with the opposition and civil society pressuring for a fully proportional system. The experience of previous elections shows that the majoritarian system favors the incumbent party, so now the opposition has a real chance. On the other hand, the low threshold encourages parties to fragment.

If the combined opposition wins, crafting a coalition government may prove a daunting task. The person of Mikheil Saakashvili is one of the challenges. UiS is unquestionably the strongest player in the opposition and Saakashvili is their candidate for the position of prime minister. Their claim to priority within the new coalition would be fully legitimate; however, for most other opposition parties, Saakashvili’s leadership is totally unacceptable. Moreover, Ivanishvili with his deep pockets may propose a more attractive deal.

This is not to predict that in the event of a combined victory, the opposition will fail to find a common ground: whatever the pre-election rhetoric, Georgian politicians may be flexible and pragmatic. But coalition politics is untested waters in Georgia; some voters may be sceptical whether this fragmented opposition will be able to create an effective government.

The incumbent and its methods

GD has reasons to be nervous. It uses its usual methods, however unusual in true democracies. Just before elections, Bidzina Ivanishvili offers people goodies in his private capacity. 25 days before elections, he decided to present to the capital city the territory of the former hippodrome, 36 hectares of land in downtown Tbilisi that he had acquired during Mikheil Saakashvili’s time in power. It was said that a new Central Park will be created there, and the same Ivanishvili will pay for it.

Eight days before elections, there was a ceremony of opening a new Kutaisi International University. Again, Ivanishvili, as a private citizen, was the founder and the sponsor. Supposedly, the university will compensate Kutaisi, Georgia's second-largest city, for the GD government having deprived it of its status of the parliamentary capital of the country.

Whatever one may think of the GD leader going on a pre-election charitable spree, these projects may be good in themselves. The so-called ‘Cartographers’ case’ looks much more gruesome. 24 days before elections, the prosecutor’s office detained Iveri Gelashvili and Natalia Ilychova, public servants who for many years had been involved in negotiations over border demarcation with Azerbaijan. They are accused of deliberately “hiding” certain Soviet-time maps that would strengthen Georgian’s negotiating position. The alleged crime took place in 2007, under Mikheil Saakashvili’s leadership.

GD leaders were quick to publicly describe the alleged crime as a “high treason” and “selling out the native land”. They also indicated that higher-level leaders could be complicit. Irakli Gharibashvili, the defence minister, spelt it all out by saying that the ‘Cartographers’ case’ may create a case for banning UNM as a party behind such a treasonous act.

The general uncertainty is exacerbated by an additional player: COVID-19. Georgia is in the middle of a new spike of coronavirus infections, with numbers among the highest in Europe, and nobody can say how far it may go up by Election Day. Until recently, the relative success of the government in confronting the pandemics was considered its important trump card in the elections. Prime Minister Giorgi Gakharia acquired an image of an effective leader and saw his ratings soar. Now this card is played out.

The government has changed its approach to pandemics dramatically: in the spring, when the daily number of the infected was under 50 at its highest, it instituted an extremely strict lockdown. Now we are close to two thousand per day and restrictions are rather light. The government strongly rejected the option of postponing the elections no matter what: it appears to be strongly motivated to have them now. It may believe the surging outbreak scare will reduce the turnout: This would be in the interest of the incumbent as it has better chances to use its so-called “administrative resources” to mobilize its voters.