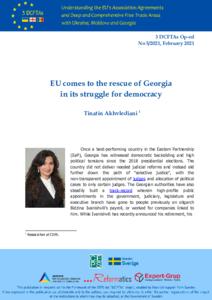 Once a best-performing country in the Eastern Partnership (EaP), Georgia has witnessed democratic backsliding and high political tensions since the 2018 presidential elections. The country did not deliver needed judicial reforms and instead slid further down the path of “selective justice”, with the non-transparent appointment of judges and allocation of political cases to only certain judges. The Georgian authorities have also steadily built a track-record wherein high-profile public appointments in the government, judiciary, legislature and executive branch have gone to people previously on oligarch Bidzina Ivanishvili’s payroll, or worked for companies linked to him. While Ivanishvili has recently announced his retirement, his close ties with highly placed public officials hint that he will keep ruling the country informally. Let alone growing “selective justice”, “elite corruption” and informal ruling, the country has ended up with a one-party parliament, as the opposition parties keep rejecting the 2020 parliamentary election results, refuse to take their seats in the new parliament and instead call for snap elections.

The recent arrest of Nika Melia, the chairman of the largest opposition party, United National Movement (UNM), proves to be a new low for a country already in deep political crisis. The disagreement over Melia’s detention inside the ruling party, Georgian Dream (GD), even triggered the resignation of Prime Minister Gakharia, marking the sixth change of prime minister in the country since GD came into power back in 2012. The new prime minister, Irakli Garibashvili, known for his long-time association with Bidzina Ivanishvili, including serving already in this capacity in 2013-15, began his new mandate by going ahead with the arrest of Melia, in the name of the restoration of justice. This however proved not to be a good starting point, neither for de-escalation of political tensions, nor for restoring the rule of law. International organisations and NGOs, including Transparency International and Amnesty International, condemned the violent means of the arrest before the Court of Appeal’s judgment, and criticised the government for aggravating the political crisis and damaging the country’s international reputation.

Melia’s detention extended the list of politically motivated arrests and triggered a whirlwind of anti-Russia sentiments in the country. First, Nika Melia was arrested on the grounds of leading the demonstration in June 2019, the so-called “Gavrilov night”, when Georgians protested against the Russian MP’s presence in the country’s legislature. Second, the arrest took place on 23 February, on the memorial day of Cadets who fell resisting the invasion of Georgia by the Red Army 100 years ago. No surprise this sparked anti-Russia movements among Georgians who are known for their strong sense of identity and unparalleled aspiration for a European future. The protests started in the UNM headquarters and moved to the parliament building. The online campaign “Never back to the USSR” went viral on social media and the opposition leaders have announced plans to hold regular protests throughout the next two weeks

The EU Delegation in Georgia, together with other diplomatic representatives, has invested immense efforts to facilitate cross-party negotiations over the weeks since the parliamentary elections. Yet these talks did not result in any agreement and became deadlocked even before the detention of Melia. The arrest in fact has had the effect of strengthening the unity of the opposition parties and their call for snap elections and the release of political prisoners. The statements from the EU and several politicians from the EU member states urged all parties to find common ground, yet these calls did not result in the renewal of cross-party dialogue. Lithuanian Seimas Foreign Affairs Committee Chair Žygimantas Pavilionis, has even called for sanctionsagainst the Georgian officials responsible for the political escalations. Yet in a response he received a blunt dismissal from new prime minister, who found such calls meaningless and offensive.

In the midst of this political turmoil the recent visit of the European Council President Charles Michel to Georgia came to the rescue of the deadlocked political dialogue. Michel went beyond iterating the EU’s call for the resumption of negotiations and called for an actual meeting, bringing the government and the opposition party leaders back to the negotiating table. Even though the negotiations did not result in any agreement, the resumed talks mediated by the President Michel himself renewed the cross-party dialogue and gave a rendez-vous to Georgia until the EU-Georgia Association Council meeting already scheduled for two weeks later. This made clear that the EU will be closely monitoring developments in Georgia within the next two weeks, and will be expecting more responsible political leadership from the government and opposition parties in the interest of the Georgian people.

While many have been criticising the EU for the lack of its geopolitical actorness in the region, the current visit of Charles Michel to Georgia brings some optimism that the EU can deliver through its stronger engagement with the partners who keep fighting for democracy.

First, the EU owes to its Eastern Partnership (EaP) policy to demonstrate to the Georgian people that it stands for democracy and human rights in its Eastern neighbourhood. While parallels could be drawn with the repressions in Belarus and the recent war between Azerbaijan and Armenia, Georgia’s case is different. Unlike Belarus and Armenia, both members of the Eurasian Economic Union, and Azerbaijan with its authoritarian regime failing to conclude an agreement with the EU, Georgia has been the posterchild of the EaP policy. The country is committed to an ambitious Association agenda with the EU and the current political unrest risks undermining Georgia’s achievements and future deliverables of its hard-won Association Agreement. A recent study already points at worsening Georgia’s ratings due to its current political situation. While the country has recently announced its ambitions to apply for EU membership by 2024, the present political crisis if unresolved makes the EU’s positive reaction more than highly unlikely, actually inconceivable. This risks causing great frustration among the Georgian people, the majority of whom (77%, according to the opinion polls 2020) still dream of a European future. While keeping its strong engagement in the current events, the EU should make it clear that if the country truly holds to these aspirations then it should take the membership criteria and EU fundamental values more seriously.

Second, it is in the EU’s interests to have a strong partner in its Eastern neighbourhood to project its values and its strategic interests in the region. Without a strong engagement, the EU would only demonstrate its weakness as a foreign policy non-actor, giving way to Russia’s dominant influence in the region.

We will soon see how Georgia proceeds with meeting its rendez-vous clause in two weeks time. Yet it is already clear that the stronger engagement from the EU can deliver immediate results. This further suggests that if the dialogue is not continued and an agreement is not reached between the parties, then increased pressure from the EU should come to rescue from the political crisis in Georgia. This may also include warning sanctions on the individuals, both acting and retired officials, responsible for blocking democratic progress. Unlike Belarus, imposing sanctions could be more effective in Georgia, as Georgian officials would struggle to shift their assets to Russia for political reasons. At the centre of the problems stands Georgia’s one and only oligarch, and the current political crisis is ultimately linked to one person’s wealth. While the individual EU Member States, France in particular, have been generous to the Georgian billionaire (including awarding him with the highest order of merit recently), the EU should show that it will no longer turn a blind eye to incomplete justice reforms, increasing corruption and oligarchic regimes in its neighbourhood. As several studies have already warned, tolerating oligarchs paves the way to exactly the kinds of political escalations seen in Georgia, undermining democracy and risking the European integration of the EU’s partner countries. This once more highlights that the EU should pay more attention to conditionality and its application in its neighbourhood policy.