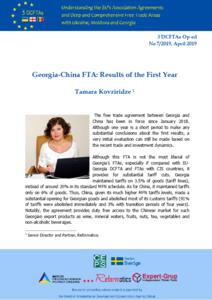 Please refer to the full version via the download link below since the op-ed contains graphs and tables.

The free trade agreement between Georgia and China has been in force since January 2018. Although one year is a short period to make any substantial conclusions about the first results, a very initial evaluation can still be made based on the recent trade and investment dynamics.

Although this FTA is not the most liberal of Georgia’s FTAs, especially if compared with EU-Georgia DCFTA and FTAs with CIS countries, it provides for substantial tariff cuts. Georgia maintained tariffs on 3.5% of goods (tariff lines), instead of around 20% in its standard MFN schedule. As for China, it maintained tariffs only on 6% of goods. Thus, China, given its much higher MFN tariffs levels, made a substantial opening for Georgian goods and abolished most of its customs tariffs (91% of tariffs were abolished immediately and 3% with transition periods of four years). Notably, the agreement provides duty free access to the Chinese market for such Georgian export products as wine, mineral waters, fruits, nuts, tea, vegetables and non-alcoholic beverages.

There are no approximation requirements or specific additional non-tariff barriers other than the parties’ WTO obligations, and WTO+ approach is adopted only in services. Thus, as far as trade in goods is concerned the tariff liberalization may be expected to contribute to an increase in trade, especially given that unlike the DCFTA with the EU there are no specific non-tariff or legal approximation requirements.

In the first year of the FTA’s implementation, trade turnover between Georgia and China increased by 10%, in contrast to a 29% increase in 2017. Notably, exports from Georgia decreased by 2% compared to the previous year. China was Georgia’s 4th largest trade partner with a share of 8.3% in total trade turnover and 6th largest export partner, export volume amounting to almost 6% of the total exports.

Interestingly, China has become one of Georgia’s key wine export destinations in recent years. Although wine exports has been increasing steadily, on average by 65% from 2015 to 2017 annually, after the conclusion of the DCFTA, i.e. in 2018, it decreased by 3%. Nevertheless, China is the 3rd largest wine export destination after Russia and Ukraine with over 10% share in wine export.

As the trade statistics show, it is too early to speak of any additional boost that the FTA gave to Georgian exports to China. Over the last 5 years, before the FTA, China’s role as Georgia’s trade partner has become more significant and Georgian exports had grown at an average annual rate of 58% between 2013-2017. Negotiating the FTA was in China’s interest after the entry into force of the DCFTA with the EU (before that China has declined Georgia’s offers to sign an FTA), and therefore it is expected that a functional free trade agreement will – at least in the medium term - boost Chinese investment, among others, aimed at producing in Georgia products eligible under the DCFTA’s tariff-free regime. Georgia may be interesting a regional hub for production and trade, opening up access to wider markets on the one hand and offering attractive business climate and investment opportunities on the other hand.

There is some increase in investment already visible - Chinese investment to Georgia increased by 62% in 2018, against the background of a 35% decrease of total FDI. It is expected that additional investment will, among others, contribute to export and trade growth.

Comparatively, a similar trend is visible in the EU-Georgia trade since the conclusion of the DCFTA. There is a continued growth of trade and export, but notably, trade between the EU and Georgia was increasing more rapidly (on average by 17% per annum) in the four years before the DCFTA (2010-2013) than in the four years (on average by 4% per annum) after its application (2015-2018).

Just to draw another comparison, when Georgia concluded its FTA with Turkey, the latter was Georgia’s key trade partner and economic and trade ties were booming. A noticeable growth and diversification of exports took place after additional Turkish FDI started to flow to Georgia, specifically with the purpose to produce in Georgia and then sell outside the country. In particular, the Georgia-Turkey FTA resulted in increased Turkish investment in the textile industry, with ready-made Georgian products being exported back to Turkey and elsewhere. As a consequence, exports of textile products from Georgia grew substantially, from $11.2 million in 2007 (when Georgia-Turkey FTA was signed) to $66.8 million in 2018.

The above brief analysis demonstrates that an FTA with a small market like Georgia will yield results only if and when it is coupled with opportunities for foreign companies to invest and sell their products to other FTA partner countries. This in turn is possible provided that the business climate in Georgia - on paper and in practice - is attractive, reliable and competitive. The track record of benefits from Georgia’s FTAs with Turkey, the EU and China demonstrate that free trade agreements alone cannot do miracles, and they need to be coupled and packaged with FDI opportunities, in order to generate additional foreign capital needed to boost production and export. The more so for small, not resource-rich markets.