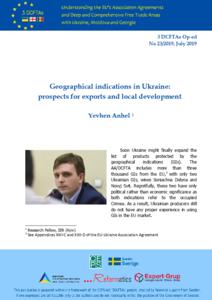 Geographical indications in Ukraine: prospects for exports and local development

Soon Ukraine might finally expand the list of products protected by the geographical indications (GIs). The AA/DCFTA includes more than three thousand GIs from the EU, [1] with only two Ukrainian GIs, wines Soniachna Dolyna and Novyj Svit. Regretfully, these two have only political rather than economic significance as both indications refer to the occupied Crimea. As a result, Ukrainian producers still do not have any proper experience in using GIs in the EU market.

In April 2019, the Ministry of Agrarian Policy and Food approved the list of eight priority products that potentially might be registered as geographical indications in Ukraine and the EU. [2] The new Ukrainian GIs products will include wines (Shabskyi, Yalpuh, Zakarpattia, Bilhorod-Dnistrovskyi), cheese (Hutsul) Sheep Bryndzya), watermelon (Kherson Watermelon), sweet cherries (Melitopol Cherries), and honey (Carpathian Honey).

Are similar products protected in the EU?

The list of proposed Ukrainian GIs corresponds to products in the EU register that includes about 3,400 names. In the EU, wines, wine must, and other spirits make more than a half of all GIs. Besides, there are hundreds of cheeses with GI status.

Other products seem to be rarer on the list. Different kinds of honey are protected in Greece, Spain, France, Italy, Portugal, Luxembourg, and Poland (about 20 GIs). The EU also protects a few GIs for cherries (Greek, Portuguese, Italian, and Spanish). However, Ukrainian Kherson watermelon might become the first product of its kind with GI status. Ukraine has a chance to add more rare and/or exotic products on the GIs’ list in the EU.

Does Ukraine export such products?

In the EU, the GIs accounted for 15% of food and drink exports in 2017. However, Ukraine still needs to find its place in this part of the international market. Even though agrifood exports reached almost USD 19 bn in 2018, few Ukrainian “branded” products are familiar to European consumers.

Some food products originating from Ukraine are already rather popular in the EU market. For example, demand for Ukrainian honey is permanently high in Europe. The honey exports to the EU traditionally exceed the tariff quotas established by the DCFTA. In 2018, honey exports to the EU reached about 39 thousand tons worth USD 78 m (80% of total honey exports), more than seven times higher than the quota. [3] The EU is also the main market for Ukrainian watermelons (USD 2.6 m or 83%). This “big berry” has good potential for exports growth as still less than 10% of Ukrainian watermelons are sold abroad.

At the same time, European consumers are not familiar enough with Ukrainian wineries. The CIS countries (in particular, Russia) remain the main market for Ukrainian wine and wine must. Only about one tenth is exported to the EU (USD 3.9 m in 2018). Before 2015, Russian market was also the main consumer of Ukrainian sweet cherries (a few millions of US dollars annually), and afterwards, Belarus became the main export destination probably providing also a channel for re-exporting of cherries to Russia. Only in 2017-2018 Ukrainian producers started exporting sweet cherries to Poland. The CIS countries also consume three-fourths of cheese exported from Ukraine.

The figures demonstrate that Ukraine might have a chance to increase exports and diversify markets of its expected GI products. Development of the system helps to solve a number of trade-related issues, e.g. standardization in the sector. Development of local brands might increase the quality of products both for foreign and domestic consumers. Finally, development of GIs is a good incentive for local producers to tighten cooperation. For example, some producers of bryndzya, wine, watermelons and cherries have already established associations to facilitate registration of GIs. [4]

GIs can also contribute to development of agritourism. An EU project supports a pilot project “Wine and Taste Roads of Bessarabia” in the Odesa Region. [5] Agritourism is a good opportunity for local/rural development, including amalgamated territorial communities.

Finally, work in the field might foster the IPR reform in Ukraine, which advances only slowly. Ukraine needs to change the legislation in the area and train officials who work with GIs. The draft law to amend the law of 1999 has been adopted only in the first reading in March 2018.

[2] The MAPF’s list was based on the proposal of the EU project “Support of the development of geographical indications in Ukraine”, launched in September 2017.

[3] Hereafter the State Statistical Service of Ukraine is the source of trade statistics.