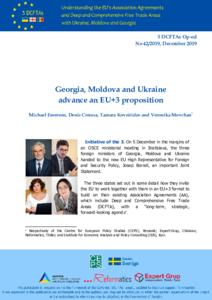 On 5 December in the margins of an OSCE ministerial meeting in Bratislava, the three foreign ministers of Georgia, Moldova and Ukraine handed to the new EU High Representative for Foreign and Security Policy, Josep Borrell, an important Joint Statement.

The three states set out in some detail how they invite the EU to work together with them in an EU+3 format to build on their existing Association Agreements (AA), which include Deep and Comprehensive Free Trade Areas (DCFTA), with a “long-term, strategic, forward-looking agenda”.

To be noted, the new government of Moldova shared in this statement with their other two partners, contrary to speculation otherwise. Thus, European integration remains an operational concept and agenda for all three countries, regardless of their respective relations with Russia.

The three states themselves had already in October submitted more detailed proposals to the European Commission in the framework of its ‘structured consultation’ on the future of the Eastern Partnership (EaP). These submissions included proposals both for an overarching trilateralisation of EU+3 cooperation and a substantial set of sector-specific proposals.

This EU+3 initiative is not an isolated proposal of the three governments. On the contrary, it joins with a strong current of other similar initiatives from the European Parliament and civil society.