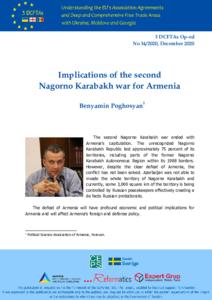 Implications of the second Nagorno Karabakh war for Armenia

The second Nagorno Karabakh war ended with Armenia's capitulation. The unrecognized Nagorno Karabakh Republic lost approximately 75 percent of its territories, including parts of the former Nagorno Karabakh Autonomous Region within its 1988 borders. However, despite the clear defeat of Armenia, the conflict has not been solved. Azerbaijan was not able to invade the whole territory of Nagorno Karabakh and currently, some 3,000 square km of the territory is being controlled by Russian peacekeepers effectively creating a de facto Russian protectorate.

The defeat of Armenia will have profound economic and political implications for Armenia and will affect Armenia's foreign and defense policy.

It's too early to assess the full damage to the Armenian economy, but some trends are visible even now. According to preliminary information, during the 44 days of the war approximately 100-110,000 civilians were forced to leave their houses in Karabakh. An absolute majority of them, 90-100,000, have moved to Armenia, while up to 20,000 people moved to other settlements in Nagorno Karabakh. Since the signature of the November 9 trilateral statement, some 50,000 have returned to their homes in Karabakh, while up to 60,000 people still live in temporary homes and shelters mainly in Armenia proper. Meanwhile, serious damage to civilian infrastructure was inflicted. Gas pipelines and electricity grids are destroyed. Other seriously damaged sectors of Karabakh economy are power generation (from 36 hydropower plants only 6 are currently in the territories controlled by Russian peacekeepers), and agriculture, as up to 95,000 hectares of arable lands of Nagorno Karabakh are now under the Azerbaijani control. Armenia has to cover all the costs for providing shelter and food to refugees, as well as to pay for the reconstruction of infrastructure of the territories currently under Russian protectorate. Given the significantly deteriorated economic situation of Armenia due to the COVID – 19 even before the war, the economic outlook of Armenia seems quite grim. Since the end of the war, Armenia has faced an average of 20 percent increase in basic food prices and a 10 percent depreciation of the currency. Recently the parliament approved the budget of 2021, which envisaged 3.2 percent GDP growth, but few in Armenia believe that this goal is reachable.

The complete defeat of Armenia in the war, as well as mounting pieces of evidence of the incompetence of government both before and during the war, has significantly weakened Pashinyan's position. Currently almost all political parties in Armenia, apart from the ruling "My Step" faction in Parliament, demand Pashinyan's immediate resignation, the formation of an interim government, and the organization of snap parliamentary elections in late 2021 or early 2022. The 17 parties that established “The homeland salvation movement” have put forward a joint candidate for interim Prime Minister, a veteran of Armenian politics Vazgen Manukyan. Manukyan was one of the leaders of the Karabakh movement in Soviet Armenia in the late 1980s. He was elected as the first Armenian Prime Minister in 1990 and assumed the position of the Minister of Defense in mid-1992, supervising successful military operations that significantly contributed to the Armenian victory in the 1992-1994 Karabakh war. The leaders of the Armenian Church, many Diaspora organizations, the leadership of the National Academy of Sciences and Yerevan State University also demand Pashinyan's resignation. Currently Pashinyan controls the "My step" faction, as well as the Police and the National Security Service. In recent days law enforcement bodies were actively clashing with the protestors in the streets, dispersing anti-Pashinyan rallies by force. Meanwhile, some circles within the "My step" faction discuss the possibility of ousting Pashinyan and electing a new interim Prime Minister from the "My step", perceiving this as an option to keep power until the snap parliamentary elections.

Relations with the EU and NATO

It seemed that the "Velvet revolution" created additional favorable conditions for the development of Armenia-EU and Armenia-NATO relations. The new government of Armenia declared its intention to accelerate the reform process in Armenia, including the fight against corruption, creation of an independent judiciary, and fostering the rule of law. Pashinyan talked about the necessity to have something bigger than CEPA with the EU but was told that the only way to deepen relations beyond CEPA was to sign an Association Agreement, including DCFTA. However, that would require leaving the Eurasian Economic Union, and Pashinyan was not ready to fully destroy relations with Russia. There was no breakthrough in Armenia-NATO relations either. Armenia's new government understood very quickly that to have a qualitative change in bilateral relations, such as the establishment of Armenia-NATO Commission or a substantial NATO-Armenia Package, Armenia would have to leave CSTO and take concrete actions to kick out the Russian military base from Gyumri. Otherwise, relations will continue within the Individual Partnership Action Plan (IPAP) framework.

The second Karabakh war will have long term implications for Armenia-EU and Armenia-NATO relations. Political and expert circles in Armenia viewed with surprise the absence of any meaningful NATO reaction, while one of its strongest members – Turkey, was involved in hostilities against the Nagorno Karabakh Republic and violated international humanitarian law by deploying Syrian mercenaries in the battlefield. A similar failure by the EU to sanction Turkey and Azerbaijan for their violations of international humanitarian law during the Karabakh war significantly damaged the EU’s standing in Armenia. The most common question regarding the EU being raised today in Armenia is: if the EU imposed additional sanctions on Russia for an alleged attempt of poisoning Alexander Navalny but did nothing to put pressure on Azerbaijan and Turkey while Armenian civilian infrastructure was bombed by cluster bombs, and mercenaries were deployed, how can we believe that all talk about human rights and rule of law are not mere geopolitical tools in the hand of the EU to reach its foreign policy goals?

The establishment of the de facto Russian protectorate in Nagorno Karabakh will have a serious impact on Armenia–Russia relations. While the Azerbaijani president states that conflict has been solved, he is also saying that Armenians who currently live under Russian control are citizens of Azerbaijan, and that they should embrace themselves for the "bright future" within Azerbaijan, no one perceives the situation in this way in Armenia or Nagorno Karabakh. Population living within the borders of the Russian protectorate will never accept Azerbaijani citizenship and will never agree to live under the Azerbaijani jurisdiction. As of now, one thing is clear, Nagorno Karabakh is unable to protect itself from Azerbaijan if Russian troops leave Karabakh, and given the current line of contact, Karabakh needs years if not a decade to establish new defense lines to be able to repel any potential attacks by Azerbaijan. In this context, the presence of Russian peacekeepers is an absolute necessity if Armenia and Karabakh do not want to see the entire Armenian population of Karabakh forced to leave its lands. Of course, this situation provides significant leverage for Russia to influence Armenian foreign and domestic policy. Actually, after November 10 trilateral statement Armenia is much more dependent on Russia than at any time after gaining independence in September 1991. This means that Armenia has few if any opportunities to continue any resemblance of balanced or multi-vector foreign policy, which Yerevan for better or worse sought to pursue in the last 20-25 years. This does not mean that Armenia will cancel its Comprehensive and Enhanced Partnership Agreement with the EU or will stop its cooperation with NATO within Individual Partnership Actions Plans. But it means that all significant domestic and foreign policy decisions in Armenia will not be adopted without the tacit approval of the Kremlin.