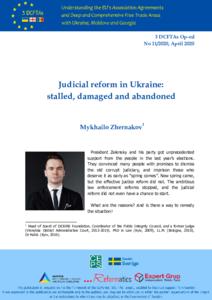 President Zelensky and his party got unprecedented support from the people in the last year’s elections. They convinced many people with promises to dismiss the old corrupt judiciary, and imprison those who deserve it as early as “spring comes”. Now spring came, but the effective justice reform did not. The ambitious law enforcement reforms stopped, and the judicial reform did not even have a chance to start.

What are the reasons? And is there a way to remedy the situation?

Why is judicial reform in Ukraine stalled?

One of the first bills President Zelensky submitted to the newly formed Parliament last fall was Bill #1008. The Rada voted the bill last October, and it came into force as Law 193-IX. Among other things, it aimed at relaunching the judicial governance bodies responsible for the failure of the judicial reform under the previous administration - the High Qualifications Commission of Judges (the HQCJ) and the High Council of Justice (the HCJ). The law sacked all incumbent members of the HQCJ. The new ones were supposed to be re-elected with the help of the independent international experts, in a way similar to the recent successful formation of the specialized Anticorruption court.

However, the process of adoption of the bill was neither transparent nor inclusive, and that affected its quality. Among the progressive provisions, it included a number of severe flaws and dangerous provisions, such as a very controversial downsizing of the newly established Supreme Court. The EU and other Western partners of Ukraine expressed concerns about the latter. Later the Venice Commission severely criticized the downsizing provision in its opinion, at the same time greenlighting the renewal of the judicial governance bodies.

The biggest flaw of the Law 193-IX was giving too much power over the process of the implementation of the reform to the High Council of Justice, the same institution that had itself to be significantly renewed as a result. Shortly after, the HCJ completely sabotaged the implementation of the law. The HCJ eliminated the role of the international experts in the Competition Commission designed to relaunch the HQCJ, as well as failed to delegate on time three members to the Integrity and Ethics Commission aimed at checking the integrity of the HCJ members. Moreover, the HCJ went as far as to blame the international organizations for this sabotage.

This situation turned out to be another demonstration that the recipes for judicial “self-governance” that work in stable democracies are questionable at best in transitional countries like Ukraine.

After the 2016 constitutional amendments regarding judiciary, the composition of the HCJ includes “the majority of judges elected by judges”. Out of 21 members, 10 are elected by the Congress of Judges, with the President of the Supreme Court as an ex-officio member. The President, the Parliament, Attorneys, Prosecutors, and Legal scholars delegate the rest, 2 members each. The Venice Commission assessed this change as “very positive” and stated that HCJ deciding on all the matters regarding judicial career is “a very positive and welcome feature to guarantee the independence of the judges”; the EU officials of the highest level made similar comments repeatedly.

However, the reality turned out to be very different not only for the renewal of the judiciary, but also for the independence of the same judges the HCJ was supposed to guarantee. Apart from keeping some notorious judges on their positions and even promoting them to the Supreme Court, the HCJ systematically pressures judges who rule against the interests of powerful politicians.

Such behavior originates from the composition of the HCJ. Giving that self-governance by the judiciary (the least trusted public institution in Ukraine) before cleansing its ranks was a bad enough idea,  the compromised judges would not vote for anyone ready to dismiss them. However, the system of appointment has little to do with judicial self-governance. The last time the Congress of Judges voted for four new members, it selected members that were agreed upon beforehand in the high political offices. All four had issues with their integrity, and 2 other current members were voted in unconstitutionally.

Two recent decisions of the Constitutional Court (the CC) only worsened the situation.

One decision, adopted on 18 February 2020, canceled parts of the 2016 judicial reform. It declared unconstitutional the liquidation of the “old” Supreme Court and the lowering of monthly retirement payments for retired judges who did not undergo the qualification assessment. This decision will add 9 “old guard” judges who refused to take part in the competition intended to screen candidates for the “new” Supreme Court. It will also significantly increase the payments to the retired judges, putting additional burden on the state budget in a difficult economic situation.

On 11 March, the CC adopted a decision on the constitutionality of the Law 193-IX. The Court canceled the downsizing of the number of Supreme Court judges, as recommended by the Venice Commission. At the same time, it declared the HCJ Ethics Commission and reduction of the HQCJ size to 12 members unconstitutional (which means that the Public Integrity Council, an official civil society judicial integrity commission would have much less influence than envisaged), with a very unconvincing reasoning.

Such an approach can be explained by the composition of the CC and the way it is formed. Currently, 9 out of 15 CC members have a judicial background. This means that the decisions they issued on the status of judges and judicial remuneration largely influence the careers and financial stance of their relatives, family members and former colleagues and, in a way, their own. Therefore, the CC has a tendency to rule in favor of the incumbent judges and the “judicial corporation” in general, which almost inevitably means ruling against any meaningful judicial reform. In addition, despite the constitutional requirement that all the CC judges have to be selected on a competitive basis, in reality the selection process is still largely politicized. It remains unclear, though, whether these decisions were coordinated with the Office of the President, and if so to what extent.

Despite the significant collateral damage, there is still a way to fix the reform.

As the terms expired and a number of provisions were found unconstitutional, it is impossible to implement the Law 193-IX correctly without changing it.

Starting December last year, a bill designed to unblock the reform is pending at the Office of the President. The legislative change aims at implementing a number of recommendations by the Venice Commission. It also removes the HCJ from the process of implementation of the reform as it was clearly shown that in the current composition it will oppose any effective change.

The international partners of Ukraine positively evaluated this initiative. However, the President hesitated to introduce the changes despite the urgent need to cleanse the judicial governance bodies and repeated calls from civil society.

This complication also has a personal dimension. There has been a significant change at the Office of the President (the OP), the main policymaker of the reform. As a result, there is no senior owner of the reform left at the OP, and the current officials tend to look for less substantial and more technical solutions, such as to convince the HCJ to launch the HQCJ competition without changing the composition of the HCJ itself.

However, the absence of the HQCJ is a problem, but not nearly as big as the presence of the old, unreformed HCJ that only seeks to retain the status-quo and sabotage any effective change in the judiciary. Should its current officials stay in place and keep control over the implementation of the legislation, the reform will never be effective.

On the other hand the good news is that on December 7, 2019, the IMF Managing Director announced a $5.5 billion 3-year program for Ukraine, stating that Ukrainian authorities agreed that the rule of law and the integrity of the judiciary are crucial for Ukraine’s economic success. This is the first time the IMF names the independent judiciary as one of its objectives in a financial support program. If the effective reform of the HCJ stays among the IMF conditionalities, the chances of the substantial change grow as Ukraine’s Parliament recently made first concrete steps towards the launch of the programme.

Ukraine cannot afford another window dressing exercise as its judicial reform. This is why it is unacceptable to agree on anything other than effective overhaul of the judicial governing bodies, primarily the HCJ.

It is extremely important to adopt the legislative amendments which will exclude the HCJ from the implementation of the reform, i.e. formation of the HQCJ Selection Commission and the HCJ Ethics Commission. It is also very important that civil society is given a significant role in the reform. The Public Integrity Council (the PIC) should be maintained and strengthened. Civil society should work together with the international community on the assessment of the candidates to the judicial positions and those in judicial governance bodies.

Moreover, further judicial reforms are needed to ensure the sustainability of change. President Zelensky should introduce legislative amendments (possibly as amendments to the Constitution) providing for the relaunch of the HCJ and offering a new model for its formation. Following the positive experience of the selection of HACC judges, international experts should whitelist the candidates to the HCJ so that the political bodies and judicial governance bodies prone to political influence would only select the HCJ members out of the pool of trustworthy candidates. Civil society representatives should be given the majority seats in this body for the transitional period.

The Parliament should also establish a transparent and inclusive competition for appointments to the Constitutional Court, and provide the legislative ground for the reforms of legal education and access to legal professions to guarantee the professionalism and integrity of future lawyers.