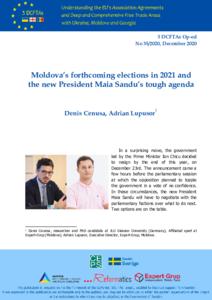 In a surprising move, the government led by the Prime Minister Ion Chicu decided to resign by the end of this year, on December 23rd. The announcement came a few hours before the parliamentary session at which the opposition planned to topple the government in a vote of no confidence. In these circumstances, the new President Maia Sandu will have to negotiate with the parliamentary factions over what to do next.  Two options are on the table.

In the first case, the dissolution of the parliament can be rushed through to set up for new elections in the next spring. Alternatively, Maia Sandu could try to appoint a “transition” or “anti-crisis” government that would prepare the country for early parliamentary elections later in the fall of 2021. Both measures are plausible and have ‘pros’ and ‘cons’, primarily in relation to Maia Sandu’s ambitious reform agenda.

On the one hand,  choosing to dissolve the parliament as soon as possible can look as an attractive scenario for Sandu making the elections possible in spring 2021. However, it entails visible-and-hidden challenges. In the first place, the Constitutional Court would have to allow organizing elections earlier than six months after the latest ones; the presidential elections having bee held in November 2020. This aspect is yet to be clarified. Moreover, during the interim the only stable power institution in the country would be the presidential office, and the public will watch and wait for Sandu to manage the state’s affairs. The pandemic and the economic decline will maximize the pressure on her. That means that the political instability and possible problems linked to the lack of a functional government may have painful costs for Sandu and her political image.  The Socialists and the extra-parliamentary political forces could use that to feed the propaganda attributing the political instability solely to Sandu’s presidency. The Socialists were inefficient in containing the outbreak letting the pandemic affect the business and the overall economy. This year’s droughts only complicated the situation. Having a parliamentary majority since December 2019, the Socialists also put on stand-by many structural reforms. Lately, in December 2020, they endangered the budgetary and fiscal stability of the country through a series of populist decisions, adopted precipitately before Maia Sandu’s inauguration

On the other hand, in deferring the elections to later Sandu has the chance to put the house in order, particularly in the electoral procedures, notably to improve the conditions of voting for the diaspora, before scheduling the elections. However that would require a favorable vote from 51 MPs to appoint a new government consisting of people whom she trusts, and who should have the political weight to gain the necessary votes. Her former ally, the ex-Minister of Interior and the Platform DA leader, Andrei Nastase, would be in the top of the list as a candidate for the position of prime minister position. The Socialists under the leadership of the country’s former President Igor Dodon could still reject a new government appointment. Some arrangements between Sandu’s political allies and the Socialists over a transition government might be possible with a convenient deal about the timing of the elections. Other parliamentary parties that want higher chances for re-election can look for similar trade-offs. Consequently, Dodon as the political nemesis of Sandu, may try to extract concessions for a transitional government that could help him get a jump up in the polls and a larger share of votes at the elections.

Though none of the two scenarios is perfect, Maia Sandu should pick one wisely in order to fulfil her electoral agenda.

What is on the plate of the new president Maia Sandu?

The new President of Moldova Maia Sandu was officially invested on 24 December. The date of this event is especially symbolic, on Christmas Eve, representing the hopes of 58% of the electorate for positive changes. Indeed, Maia Sandu expresses the voice of people who are discontent with the outgoing government backed by the pro-Kremlin Socialists Party.

She inspires new hopes about pro-EU reforms, mainly aimed at fighting corruption, consolidating relations with the western development partners, and implementing the Association Agreement with EU. In this regard, Maia Sandu came up with a very ambitious electoral platform in almost all areas of development: from foreign policy and national security to the business climate, pensions and environment.

However most of the electoral promises made by Maia Sandu are beyond the powers of the presidency as stipulated by the Constitution (and as shown in a recent analysis of Expert-Grup1). Three out of five national objectives included in Maia Sandu’s presidential programme are focused on the social and economic domains. These promises exceed the competences of the presidency (e.g. setting the minimum pension of MDL 2,000 (€95), or simplification of the business regulatory framework); hence the crucial importance of the change of government and early parliamentary elections.

The financial feasibility of many electoral promises is uncertain. Some rough estimates show that the financial costs of the electoral commitments of Maia Sandu for the four-year term amount to MDL 50-55 billion (€2.5-2.6 billion), or about 5-5.5% of the estimated GDP for 2021-2024, and about 15-17% of the national public budget. By comparison, the electoral programme of former president and Maia Sandu’s main electoral competitor was more than twice as expensive (about MDL 120 billion or 10-11 per cent of GDP). Maia Sandu’s programme seems closer to reality, but still seems rather unsustainable from the perspective of the public budget, even in the conditions of a favourable macroeconomic climate and a potential increase in external assistance that the new president seeks.

Maia Sandy’s electoral platform, on the one hand, denotes her ambitions for a bold and very pro-active presidency, but on the other hand fuels the risk of excessive unfulfilled expectations in a country where the mandate and attributions of the President are quite limited by the constitution. In these circumstances, the only possibility for Maia Sandu to realize her ambitious electoral program is to have robust support from the Government and Parliament. Without it, Maia Sandu, despite her bold victory in presidential elections, she risks losing the support of the people.

Therefore, Maia Sandu will have tough decisions to make after the departure of the Prime Minister Chicu. Either she can speed up the dissolution of the parliament early in 2021, or she can slow down and prepare better for early elections sometime later in 2021.