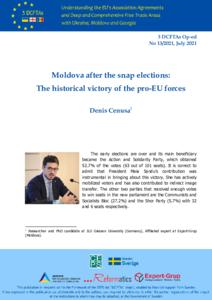 Moldova after the snap elections: The historical victory of the pro-EU forces

The early elections are over and its main beneficiary became the Action and Solidarity Party, which obtained 52.7% of the votes (63 out of 101 seats). It is correct to admit that President Maia Sandu's contribution was instrumental in bringing about this victory. She has actively mobilized voters and has also contributed to indirect image transfer. The other two parties that received enough votes to win seats in the new parliament are the Communists and Socialists Bloc (27.2%) and the Shor Party (5.7%) with 32 and 6 seats respectively.

The beginning of the „yellow revolution”

As I suggested earlier (3DCFTA, July 2021), the historical victory of PAS can trigger a "yellow revolution" in the Moldovan politics in several ways. Firstly, the country receives for the first time since 2009 a stable parliament, led by pro-EU forces. Secondly, there is no need for PAS to create unstable coalitions to govern, excluding unpleasant surprises and treasons. Finally,the results obtained by PAS allow creating a perfect synchronization of pro-EU powers between the presidency (Maia Sandu), the newly elected parliament and the future government. Therefore, the entire decision-making process will pertain to the pro-EU forces represented by one party only. It has a strong alliance with the European People's Party and will obtain all the necessary political support from Brussels, on which President Sandu counts too.

Under such a beneficial political setup, there is no problem implementing the most ambitious reforms related to anti-corruption, justice sector reform and other changes that are necessary to improve good governance in the public sector. In this regard, Moldova can become the „shining star” of the entire Eastern Partnership region, where the situation is unstable.

However, the total monopoly of political power should not have a blinding effect on PAS and President Sandu, who should apply complete transparency and openness to constructive criticism from outside their circles of sympathizers. These tips were ignored by Volodymyr Zelensky and "Servant of the People" in Ukraine or by Nikol Pashinyan and "My Step" in Armenia, which brought disappointment and slowdown in the pace of reform.

In fact, Moldova won the "golden ticket" to follow the European path with more energy. This would mean updating all avenues of dialogue with the EU, including the Association Agenda. Furthermore, the new majority in parliament can vote for a full-fledged pro-EU government that can implement reforms with President Sandu, and direct the allocation of EU funds. Furthermore, if reforms get off to a good start, Moldova could compete with Ukraine and Georgia for more EU funds under the € 17 billion global investment plans for the Eastern Partnership region over the next ten years.

On the other hand, relations with Russia may deteriorate, even if the new government attempts to improve them. The refusal to repair them could come from Moscow, which has lost its positions, although not entirely after the left-win bloc was defeated, receiving less than 30% of the vote. Russia has no choice but to mimic a dialogue with Chisinau unless it decides to freeze it for the next four years, which seems like a totally destructive approach. In any case, Russia remains a critically important element in the resolution of the Transnistria conflict and the country's energy stability. Therefore, the Moldovan authorities must treat the complicated dialogue with Russia with some care to avoid unintended consequences.

Finally, the population of Moldova demonstrated that the pro-EU orientation is stronger than ever, which gives a high opportunity for the reactivation of the reforms and with that of the European perspectives of the country.