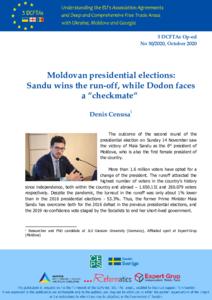 The outcome of the second round of the presidential election on Sunday 14 November saw the victory of Maia Sandu as the 6th president of Moldova, who is also the first female president of the country.

More than 1.6 million voters have opted for a change of the president. The runoff attracted the highest number of voters in the country’s history since independence, both within the country and abroad – 1.650.131 and 260.079 voters respectively. Despite the pandemic, the turnout in the runoff was only about 1% lower than in the 2016 presidential elections - 53.3%. Thus, the former Prime Minister Maia Sandu has overcome both for the 2016 defeat in the previous presidential elections, and the 2019 no-confidence vote staged by the Socialists to end her short-lived government.

The difference between Sandu and the incumbent president Igor Dodon was of more than 200.000 votes. She gained around 941.000 votes (around 57.7%), while Dodon received around 690.000 votes (around 42.2%). The biggest contributor to this outcome is the voters in the diaspora. They came in more significant numbers than in the first round (beyond 260.000 compared to around 150.000). Concomitantly, the voters from the Transnistrian region has doubled their presence establishing another record for the country – more than 30.000 voters.

An avid chess player, Igor Dodon miscalculated the movements, discounting too early the diaspora that incentivized many voters at home. The rampant discourse adopted by him did not pay off and backfired against him. Sandu’s decision not to confront Dodon in a one-on-one electoral debate also saved her from additional complications. At the same time, her intense communications with the opposition, local and foreign, and Russian-speaking media has destroyed the false myths with which  Dodon’s disinformation campaign attempted to inoculate in public. This way, the allegations that Sandu wants to eradicate the Russian language or destroy the relations with Russia lost traction. Consequently, the voters of the losing candidates from the first round channelled more to Sandu than to Dodon. It is also true that some categories of voters have mobilized against Dodon and voting the less evil.

More than 200 irregularities occurred in the day of elections. Almost half of them were related to voter bussing from the Transnistrian region. The electoral authorities did not confirm these cases, waiting for the investigation of the police. At the same time, some Russian-speaking media close to Igor Dodon has speculated that vote-buying and organized transportation of the voters took place abroad. None of these allegations confirmed. The diaspora self-mobilized and used various means to reach the polling stations, including by helping each other. At several polling stations abroad, such as Frankfurt, London, the voting ballots (maximum 5.000 per station) was exhausted by the end of the voting time.

The Central Electoral Commission should confirm the final results and only then the Constitutional Court will able to approve the outcome, opening the door to the presidency for Maia Sandu.

What are the scenarios to come?

Winning the presidency is just the beginning of a chain of actions that Maia Sandu, as elected president, and her Action and Solidarity Party, have to undertake to succeed a very ambitious reform agenda. Realistically speaking, the lack of political support in the executive and the parliament can weaken her mandate. The presidency will inevitably face one of three scenarios.

Crisis mode. The competences of the president are limited, and it is toothless without allies in other key-institutions. Therefore, Maia Sandu has to build partnerships in the existing parliament in order to start implementing her electoral promised while preparing the country for early elections. If she fails to build the necessary coalitions in the parliament, then tensions between the presidency and the parliament and executive will become frequent. That may spoil the high expectations from Sandu’s mandate and drag the presidency into interminable inter-institutional and political clashes.

Cooperative mode. A favourable scenario for Sandu could be if she builds any functional coalition in the parliament (at least 51 MPs). A ‘Frankenstein coalition’ with factions formed of pro-reform and pro-EU parliamentarians, together with those who belonged to kleptocrat networks or served the pre-2019 oligarchic regimes, could become a catastrophe. However, if such a temporary coalition served to dissolve the outdated parliament, Sandu and her political allies could give approval.

Neither, nor… Balancing between hyper-optimistic and adverse scenarios has a high probability. Sandu has a rather modest experience in foreign policy and has a mixed experience when dealing with domestic issues. Thus, having a careful approach with a strategic calculus could be the optimal path to walk. She needs to firstly consolidate her position as president and apply her most relevant competencies properly – in foreign and security policy – and only after that embark on more complicated actions involving the executive and the parliament. Her mandate will have adversaries at home in the form of Igor Dodon and the Socialists Party, and abroad if Russia will feel disrespected. The latter may happen regardless of what Sandu does. Therefore, before making radical changes in the foreign policy towards the East, she will need to put in order the relations with the West, in Brussels and with the upcoming presidency of Joe Biden in the US.

The presidency of Maia Sandu opens up many opportunities to start a more extensive process of political reform. To this end, she should select wisely her team (which can only be her presidential staff, since she cannot appoint ministers, even for foreign policy) and not rush into decision-making over the foreign policy and security issues. Mistakes would have political consequences, translating into the voting for a new parliament.