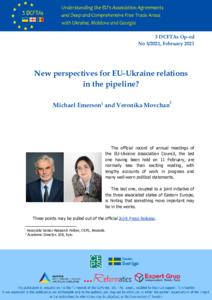 New perspectives for EU-Ukraine relations in the pipeline?

The official records of annual meetings of the EU-Ukraine Association Council, the last one having been held on 11 February, are normally less than exciting reading, with lengthy accounts of work in progress and many well-worn political statements.

This last one, coupled to a joint initiative of the three associated states of Eastern Europe, is hinting that something more important may be in the works.

Three points may be pulled out of the official Joint Press Release.

One is the announced intention of the two parties to take forward between now and the next Ukraine-EU Summit in the summer of 2021 a comprehensive review of the Association Agreement, taking the opportunity to do this in Article 481 of the Agreement. Each side will prepare its input into the review. This at least provides a time path to prepare possibly fundamental questions for consideration at the presidential level.

A second item was the ‘welcome’ given to Ukraine’s ambition to approximate its policies and legislation with the EU’s Green Deal, marked by a dedicated ‘kick-off meeting’ between Commission Vice-President Timmermans and Prime Minister Shmyhal. The Press Release lists the topics of mutual interest – energy efficiency, hydrogen, coal regions in transition, industry alliances and climate governance architecture – suggesting what to expect in the forthcoming roadmap.

A third item was the agreement to start consultation on a review of possible further trade liberalisation for goods under the DCFTA. Nothing is said about the agenda for these consultations, but independent observers such as ourselves can spot a number of topics.

A far wider agenda of topics is raised in a Joint Letter by the foreign ministers of Ukraine, Georgia and Moldova addressed on 1 February 2021 to the EU and its member states, calling for “new cooperation horizons” for enhanced political dialogue, greater economic and sectoral integration with the EU. The letter and an accompanying ‘non-paper’ go into much more precise detail, signalling that the purpose goes well beyond diplomatic niceties. For example, the letter calls for an agenda of dialogue between the European Commission and the three associated states together for enhanced cooperation beyond the present DCFTA framework in new thematic areas… “such as transport, energy, digital transformation, green economy, justice and home affairs, strategic communications, health care”. It goes on to call for enhanced security and defence cooperation with special focus on countering hybrid threats, strengthening cyber resilience, citing the EU Hybrid Fusion Cell and Cyber Security Agency.

In conclusion, the Joint Letter appeals for “building a new, strategic, long-term vision” on which to base the future of the relationship with the EU.

Our reading of all this is clear: