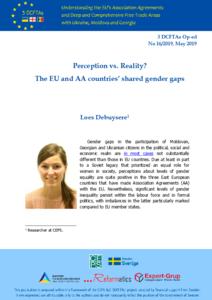 Gender gaps in the participation of Moldovan, Georgian and Ukrainian citizens in the political, social and economic realm are in most cases not substantially different than those in EU countries. Due at least in part to a Soviet legacy that prioritized an equal role for women in society, perceptions about levels of gender equality are quite positive in the three East European countries that have made Association Agreements (AA) with the EU. Nevertheless, significant levels of gender inequality persist within the labour force and in formal politics, with imbalances in the latter particularly marked compared to EU member states.